Thousands of migrants enter Guatemala with Mexico in their sights 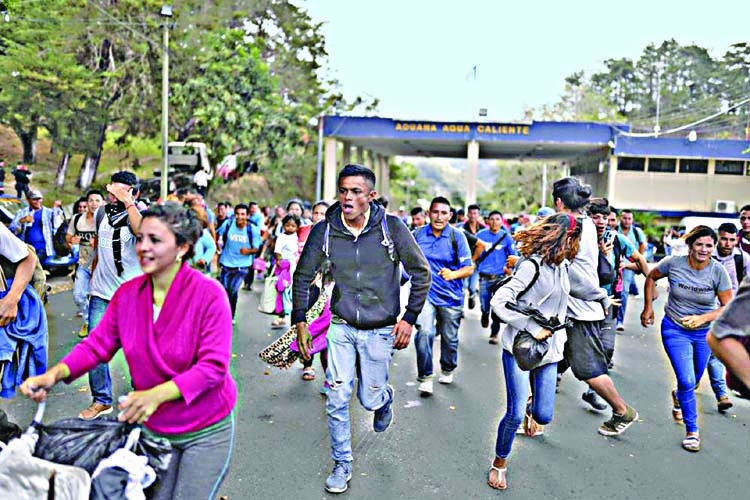 Migrants walk past a customs checkpoint as they enter Guatemala, near Agua Caliente, after crossing the border with Honduras, Thursday. -AP
United States officials are crediting tough measures taken over the past year and cooperation from regional governments for sharply reducing the number of Central American migrants who responded to a call for a new caravan.But even so, the several thousand mostly Honduran migrants who set out on foot this week are a testament to the continued driving forces of violence and unemployment plaguing the region.
Guatemalan police accompanied by US Immigration and Customs Enforcement agents swept up the majority of a group of some 300 migrants Thursday, loaded them on buses and took them back to the Honduran border at Corinto, effectively dashing their plans to travel together in a "caravan" with hopes of reaching the United States.
Near another border crossing in Guatemala, police worked out a deal with migrants to take those who had entered the country without registering back to the border to do so and then ferry them back to the migrant shelter in Esquipulas. It was unclear how many would continue and how many would turn around.
Some of those swept up Thursday were expected to give up and return to Honduras, even as scattered groups continued to walk and hitchhike through a tropical region of southeastern Guatemala.Among them was Génesis Fuentes, a 19-year-old Honduran who was part of the first mass caravan in October 2018.
Back then she made it to the northern Mexico city of Mexicali, across from Calexico, California, and lived there working as a waitress and cook for about five months. She ultimately crossed the border with some friends near Algodones, which borders California and Yuma, Arizona, but was detained by US border agents and deported last May.
Clad in a red T-shirt, a hooded sweatshirt, jeans and sandals, Fuentes was limping from a bruised knee. She said that being sent back home meant returning to a life that is no life at all. "There is no work in Honduras," Fuentes said. "Since they deported us, we have not been able to find jobs."
About 100 miles (160 kilometers) to the southwest, in Esquipulas, more than 600 migrants who crossed the border Thursday at Agua Caliente lay on the ground under a low, gray sky, sleeping or eating. A plan was forming to spend the night there and leave before dawn Friday.
Jomas Joel Paredes of Villanueva, Honduras, left San Pedro Sula on Thursday morning, a day after most of the other migrants. He had luck hitching rides, and the truck he was aboard was not stopped before the border.He said it was his fourth attempt at migrating to the United States.

He never got any farther than Mexico in any of the other tries, the most recent in 2017.Paredes said he was fleeing gang threats, debts and unemployment. He had heard in the local press that Mexico said it wouldn't let migrants pass, but he hoped the government would change its tune.
He has plans to work in Mexico for a while and send money back home before eventually trying to reach the United States. He left his wife and three daughters behind in Honduras. "Those are decisions one has to make sometimes," Paredes said.
Guatemala's immigration agency reported late Thursday that a total of 2,657 migrants had registered at its El Cinchado and Agua Caliente crossings. An unknown number of others crossed irregularly. On Thursday, the International Rescue Committee, a New York-based humanitarian aid group, said the latest migrant movement showed that the humanitarian crisis in Central America's Northern Triangle continued.
"This is not about the potential hope that awaits on the other side; it is about the destitution and insecurity that they left behind," Scott Lea, the organization's acting country director for northern Central America, said in a statement. Acting US Homeland Security Secretary Chad Wolf said Thursday that measures implemented by the US, Mexico and Central American governments have driven down demand, noting lower apprehensions at the US border for seven consecutive months.
"I will say that this caravan is not anything even remotely similar to what we saw in '18 and a little bit in '19. A few folks here and a few folks there," Wolf said in an interview on the "Brian Kilmeade Show" on FOX News Radio. "What has changed are the number of agreements that we have in place with Honduras, Guatemala, as well as Mexico." Wolf also noted the presence of US "tactical agents" in Guatemala.
---AP, Guatemala