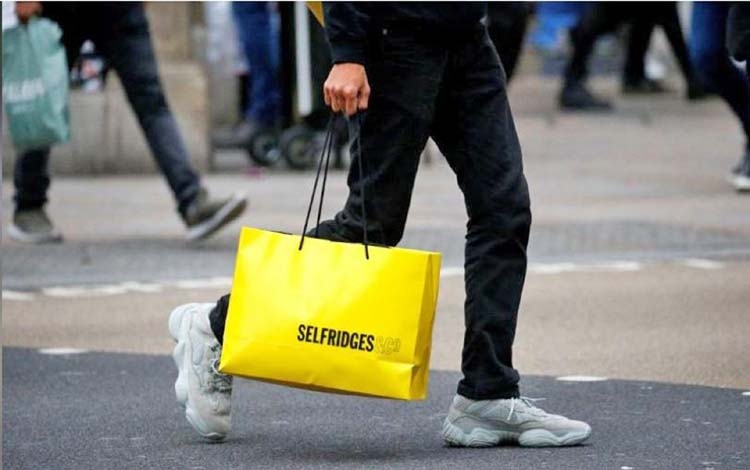 People shopping on Oxford Street in central London, Britain, December 20, 2018. -Reuters
British consumers failed to increase their spending in December for a record fifth month in a row, adding to signs of a weakening economy that might prompt the Bank of England to cut interest rates this month.Official data on Friday showed monthly sales volumes fell by 0.6% from November, defying the median forecast for a rise of 0.5% in a Reuters poll of economists.
Sales in monthly terms have not risen since July, the longest such run since records began in 1996, the Office for National Statistics said. Annual growth in retail sales volumes dropped to 0.9%, below all forecasts in the Reuters poll. The ONS also lowered its estimates for sales in November.In the fourth quarter as a whole, volumes fell by 1.0%, their worst performance since early 2017.
"The longer-term picture is still one of growth, although it has slowed considerably in recent months," ONS statistician Rhian Murphy said.An industry group, the British Retail Consortium, said last week that sales in 2019 as a whole fell for the first time since its records began in 1995.
This year's December survey period ran from Nov. 24 to Dec. 28, including the Black Friday and Cyber Monday sales promotions and the Dec. 12 election which gave Prime Minister Boris Johnson a big win.
The election outcome eliminated the risk of a disruptive no-deal Brexit as soon as Jan. 31 and there have been some signs of a bounce in confidence among consumers and companies since then.
But a hit to trade remains possible at the end of 2020, when Johnson insists a post-Brexit transition period will end, regardless of whether he can negotiate a trade deal with the European Union before then. The ONS figures are likely to feed into the rate decision next week of the Bank of England which is considering whether to cut borrowing costs.

Two of its nine policymakers voted in November and December for a cut and three others, including Governor Mark Carney, have said lower borrowing costs might be needed soon.
Consumer demand has been a strong point of the economy since voters decided to leave the EU three-and-a-half years ago. But more recently it has started to soften, despite low unemployment and modest inflation which have boosted household incomes.
Retailers reported a subdued Christmas season while Sainsbury's (SBRY.L) and Marks & Spencer (MKS.L) have said they are not expecting a bounce in consumer spending in 2020, partly blaming the continuing Brexit uncertainty.
---Reuters, London