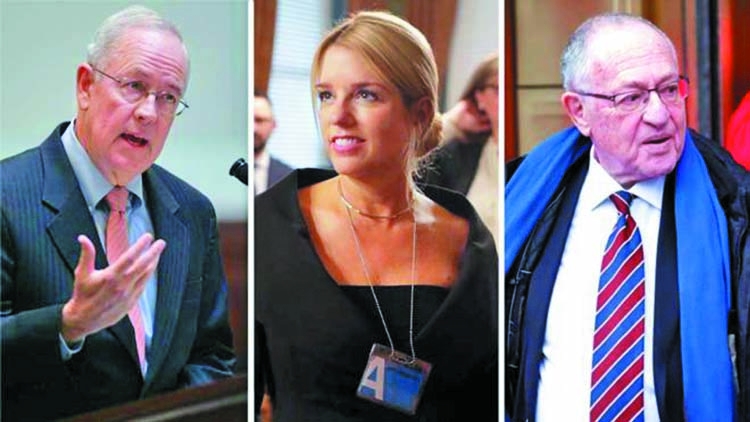 Ken Starr, Pam Bondi and Alan Dershowitz have joined the President Donald Trump's defence team. -Reuters
US President Donald Trump's defense team in his Senate trial will include special prosecutors from President Bill Clinton's impeachment.
He will be represented by Ken Starr and Robert Ray, who investigated Clinton, and Alan Dershowitz, whose past clients include OJ Simpson.White House counsel Pat Cipollone and Mr Trump's personal lawyer Jay Sekulow will lead the team.
Opening statements in the Trump impeachment trial will begin next week. Starr was the US Department of Justice independent counsel who investigated the Whitewater affair, a scandal-plagued mid-1980s land venture in Arkansas involving Bill and Hillary Clinton.
The inquiry ultimately uncovered unrelated evidence that Mr Clinton had been having an affair with a White House intern, Monica Lewinsky.The investigation culminated in the Democratic president's impeachment by the US House of Representatives in 1998. Mr Clinton was acquitted by the Senate.
Ray succeeded Starr as the independent counsel. Ms Lewinsky tweeted on Friday shortly after Mr Trump's team was announced: "This is definitely an 'are you kidding me?' kinda day", though she inserted an expletive.

In 2016, Starr was forced out of his position as president of Baylor University after an inquiry found the school had mishandled rape accusations against its football players.
He later also resigned from his roles as chancellor and law professor at the university.Trump was impeached by the US House of Representatives last month on charges of abuse of power and obstruction of Congress.
Democrats have accused him of withholding military aid to Ukraine to pressure the country into investigating his political rival, former US Vice-President Joe Biden.
Trump denies the claims, and calls the impeachment proceedings a partisan "hoax".The Republican president now faces a trial in the Senate, which must decide whether to remove him from office.As his Republican party holds a majority in the upper chamber, he is expected to be acquitted.
---BBC