Iran gave US 'slap on face' 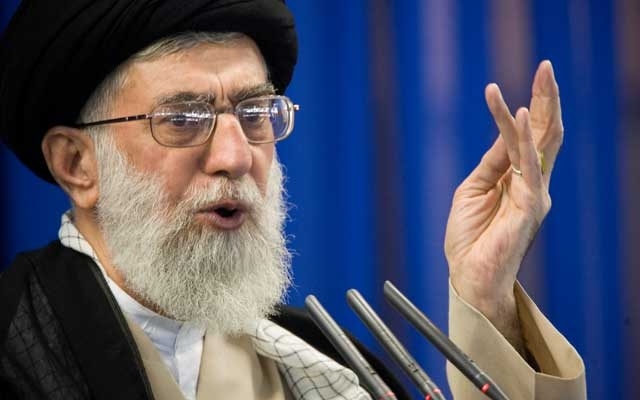 Supreme Leader Ayatollah Ali Khamenei said in a Friday prayers sermon that Iran's missile strikes on US targets in Iraq showed it had divine support in delivering a "slap on the face" to a world power.
Making the main weekly sermon in Tehran for the first time since 2012, with Iran and its clerical rulers under pressure at home and abroad, Khamenei also said that US sanctions imposed in a row over its nuclear program would not make Iran yield. Thousands had gathered inside a large prayer hall in central Tehran and packed the area and streets outside the building, chanting "Death to America".
The sermon was delivered after Iran's rulers faced days of often violent protests after the military admitted to mistakenly shooting down an airliner in the tense hours after the missile strikes, which were in turn launched in retaliation for the US killing on Jan 3 of a top Iranian commander, close to Khamenei.
"The fact that Iran has the power to give such a slap to a world power shows the hand of God," Khamenei, saying the US killing of Qassem Soleimani, commander of the Quds Force, showed Washington's "terrorist nature".
US President Donald Trump, who pulled Washington out of a nuclear deal with Iran in 2018 and ratcheted up tension by reimposing US sanctions, had ordered the drone strike that killed Soleimani, who built up proxy militias across the region.
After days of denying a role in the plane crash, the Revolutionary Guards, a parallel military force answering directly to Khamenei that acts as guardian of Islamic Republic, finally admitted on Jan 11 that one of its air defence operators mistakenly shot down Ukraine Airlines International flight 752.
Vigils for the 176 victims swiftly turned into protests against Iran's rulers. "Death to Khamenei" was chanted at protests and spray painted on walls of Tehran and other cities. Such public criticism can result in a jail term in Iran.
Khamenei described the crash as a tragedy and a very sad incident that was used by Iran's "enemies", used to describe the United States and its allies, to overshadow the killing of Soleimani, whose funeral drew huge crowds onto the streets.
In the demonstrations after the downing of the airliner, police launched a sometimes crackdown and deployed riot police outside universities, where many students had protested.
Video footage posted online showed protesters were beaten and also recorded gunshots, teargas and blood on the streets.Iran's police denied firing at protesters and said officers had been ordered to show restraint.
---Reuters