No objection to change of voting day: Quader 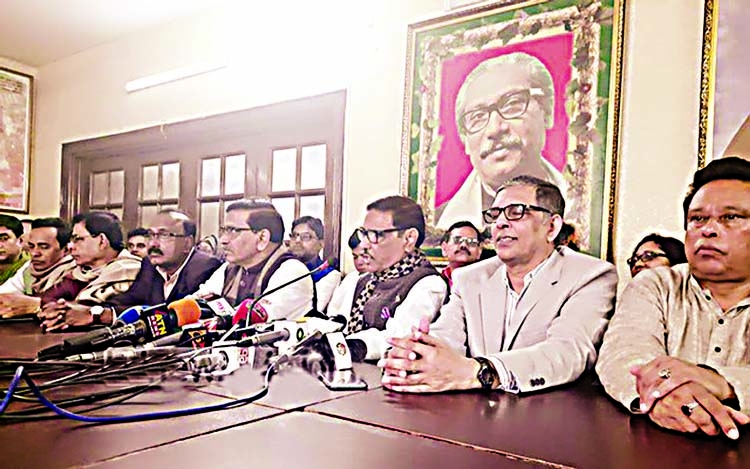 Awami League General Secretary Obaidul Quader addressing a press conference at party President's Dhanmondi office in the city on Friday. -AA
Awami League General Secretary Obaidul Quader has said the government and the ruling party will not oppose if the Election Commission (EC) changes the date of elections to two Dhaka city corporations.
He was addressing a press conference at Awami League President's Dhanmondi office on Friday after a meeting of their party. Quader, also the road transport and bridges minister, said, "If the EC thinks about changing the election date, they can do it as they've the jurisdiction.
We have nothing to do in this regard. We've also no objection to it."  Various issues were discussed in the meeting, including the voting on the day of Saraswati Puja, he added.
He refuted Oikyafront Convener Dr Kamal Hossain's remark that the government did an unjust act by fixing the voting date on the day of Puja of the Hindu community members, saying the government has no role in this matter.
"The Election Commission is an independent institution, and they have the only jurisdiction to make the election schedule. The government has nothing to do in this regard. So, it's not a justified remark that the government did an unjust act," the minister said.
Stating that Saraswati Puja is the second largest religious festival of the Hindu community, he said the Commission should hold talks with leaders of the community to find out a decent, acceptable, logical and realistic solution.