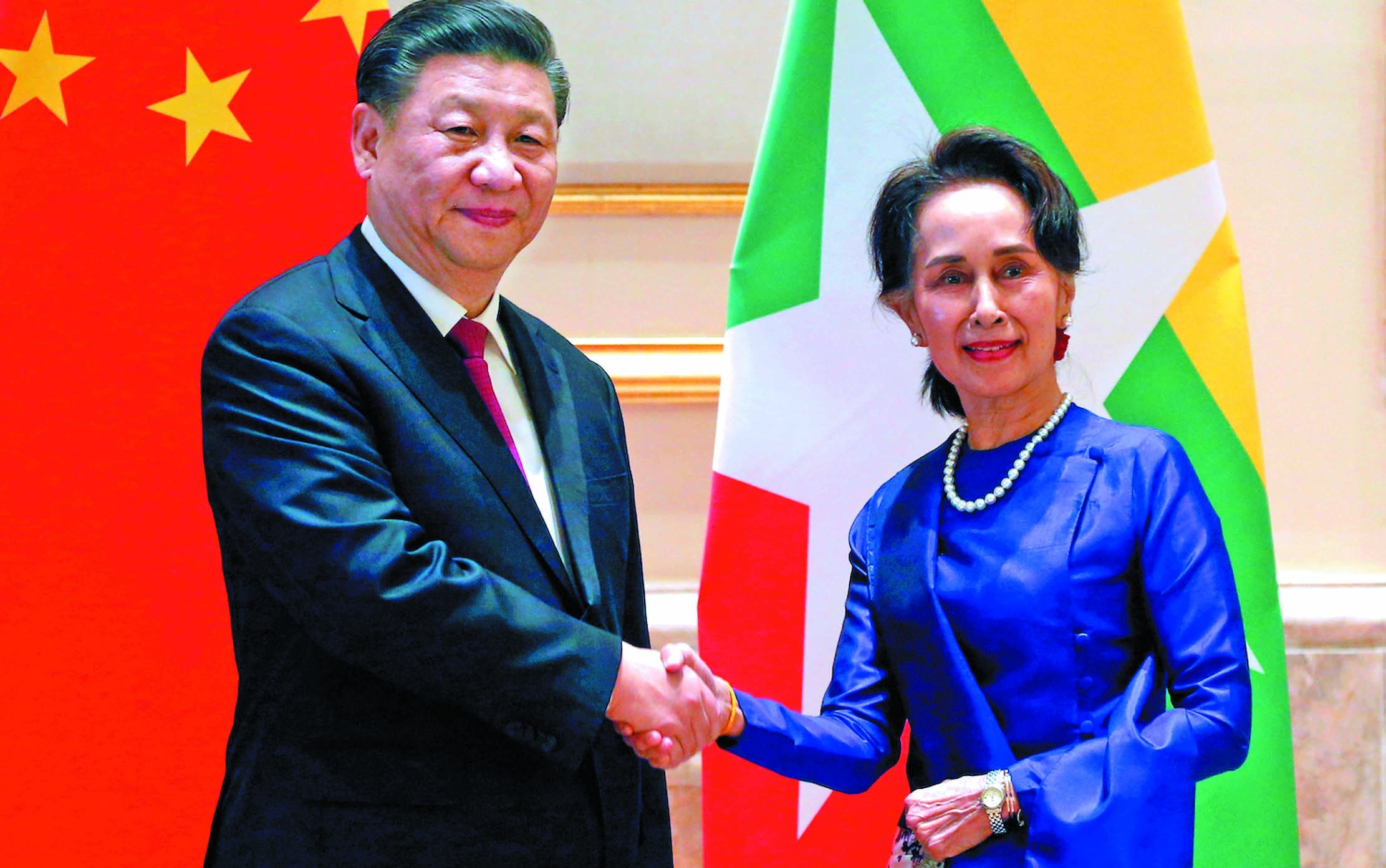 Myanmar State Counsellor Aung San Suu Kyi greets Chinese President Xi Jinping at the Presidential Palace in Nay Pyi Taw on Friday. -Reuters
Chinese President Xi Jinping flew into Myanmar on Friday for two days of talks to shore up massive infrastructure projects in a country isolated by the West over its treatment of the Rohingya Muslim minority.
State Counsellor Aung San Suu Kyi greeted him with a handshake on the steps of the presidential palace after a ceremonial welcome by the president and a military marching band, on the first day of a two-day visit, Xi's first as leader and the first of any Chinese president in 19 years.
Myanmar President Win Myint told reporters at the palace that Xi's visit was a "very historic and important trip". Analysts say Xi will seek to reinvigorate stalled infrastructure projects central to his flagship Belt and Road Initiative.
The two countries have had a historically fraught relationship, with many in Myanmar suspicious of the tremendous sway China holds over its smaller neighbor, but have moved closer since the expulsion of the Rohingya in 2017 was met with international condemnation.
More than 730,000 Rohingya were forced to flee western Myanmar after a military crackdown the United Nations has said was executed with "genocidal intent". China has defended the country on the global stage and is viewed as the biggest obstacle to a prosecution of its leaders at an international war crimes tribunal.

China is the second biggest investor in Myanmar, behind only Singapore, data published by the World Bank shows. Myanmar's exports to China, its largest trading partner, were worth $5.5 billion in 2018, while imports were worth $6.2 billion.
Hundreds of schoolchildren and government staff lined the road from the airport on Friday, waving flags and chanting, "Chinese president!" "May his health be good!"
"China always helps our country when we are in crisis or when we face natural disasters," said Aye Aye Mu, a local teacher. "They always support us and send donations to us."
But many in Myanmar view China warily and infrastructure projects have been deeply unpopular, uprooting thousands of villagers and wreaking environmental damage.
Protesters plan to gather outside the Chinese embassy in Yangon on Saturday to oppose the "exploitation of natural resources" in Myanmar, including the $3.6 billion Myitsone hydropower dam project, which was suspended in 2011 but may be restarted.
In one of the capital's most popular teashops, 34-year-old Aung Ko Latt, a businessman, said Myanmar was not equipped to evaluate Chinese projects to make sure they meet international standards and benefit local communities."They will exploit Myanmar under the current circumstances," he said.
---Reuters