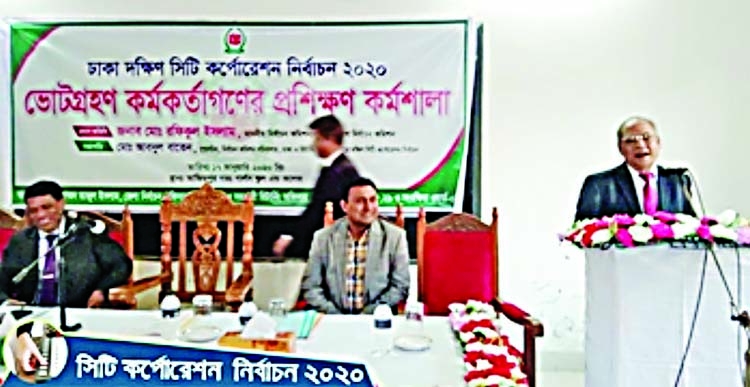 Election Commissioner Md Rafiqul Islam speaking at a training workshop at Azimpur Govt Girls' School and College in the city on Friday. -AA
Election Commissioner Md Rafiqul Islam has admitted that the casting of fake votes through electronic voting machines (EVM) is possible after seizure of election booths.
"It's not possible to help anyone through EVM programming. But after a voter receives a ballot following giving his/her finger print, anyone can rush to the EVM and cast the vote. In such cases, casting of fake votes is possible," he said on Friday.
The election commissioner was speaking at a training workshop at Azimpur Govt Girls' School and College in the capital organized for the officials who will perform as presiding and assistant presiding officers in Dhaka city polls.
His remarks came at a time when BNP is opposing the use of EVMs in the Dhaka city polls slated for Jan 30 in fear of vote-rigging through the devices. The Election Commission, is however, determined to use the machines.
Calling polling officers one-day kings, he said, "As a king, your first responsibility is to demarcate your jurisdiction. You have to delimit areas with bamboos if necessary in the schools [used as polling centers] where there is no boundary wall."
Rafiqul Islam urged the election officers to properly engage members of law enforcement agencies in preventing entry of any unauthorized persons into the polling center areas. "I'll hold you responsible if you fail to protect your kingdom as the presiding officer. Similarly assistant presiding officers are responsible for protecting the polling booths," he said.
Terming Bengali nation 'impatient', the election commissioner said, "Whenever they (Bengalis) will see any queues, they will try to break it. If any clashes took place, you will be held responsible."Referring to the coincidence of voting date with Saraswati Puja, he said the date has been fixed not to hurt anyone's religious sentiment.