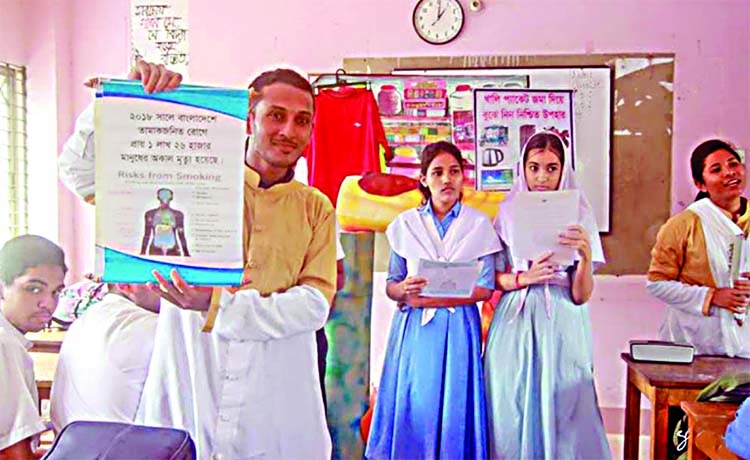 Classroom- based drama sequence against tobacco abuse staged at a Chattogram City Corporation school in the port city arranged by BITA recently. -AA
BITA in cooperation of CTFK  is conducting  academic activities through drama staging in city corporation run schools  in the city to save the  adolescents from the curse of tobacco.
In the meantime , 16 drama show were staged in 8 schools recently which will be staged in each schools of 41 city wards gradually. This academic activities is  presented within class room  involving the students with two actors. This class room drama will  show paths to save the juveniles from tobacco  effects.
Moreover , the students may play role to save the new     generations from the abuse of tobacco through participating the drama serials on abuse of tobacco. The students are providing different  informations  on tobacco  through acting and sports.
Meanwhile city mayor AJM Nasiruddin in a cultural campaign recently reiterated for necessary initiatives to turn the city free from tobacco curse by next one year. City Mayor in the campaign told that to imply the laws against tobacco  abuse will be no effective  rather to build a social movement and mass awareness  against abuse of tobacco.
To accelerate the initiatigve of the City Mayor ,  BITA (Bangladesh Institute of Theatre Arts), CAB, ELLMA with cooperation's of CTFK  are conducting  cultural programs  against abuse of tobacco in city schools.  Executive Director of BITA  Shishir Dutta told that  cultural initiatives played strong role to accelerate the Bangladesh Independence move   from Anti-British movement.
Cultural programs  easily a tracts the people rather than speech, statements etc. Project coordinator of Tobacco Free Chattogram Pradip Achariya told that govt enacted laws  in 2005  which was amended in 2013 In last one decade, a numbers   govt and  non-govt    initiatives are  being experiencing  to implement the  tobacco control laws.
Specially local govt organisations has increased their   abilities to comply the tobacco act. Besides, govt has pledged to build country free from tobacco by 2040 as  declared by the Prime Minister.