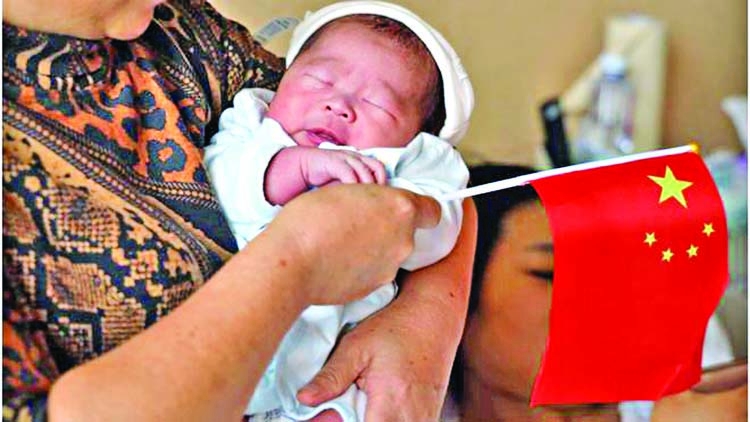 The birth rate was 10.48 per thousand in 2019 - the lowest since 1949, the National Bureau of Statistics said. The number of babies born in 2019 dropped by 580,000 to 14.65 million.
The country's birth rate has been falling for years - posing a challenge for the world's second biggest economy.Despite the birth rate falling, a lower death rate meant China's population hit 1.4 billion in 2019, inching up from 1.39bn.
But the falling birth rate is raising fears of a "demographic timebomb" - that is, a smaller working-age population having to support a bigger, retired population. China's birth rate is lower than the US which stood at 12 per thousand people in 2017 (the most recent data available), but higher than Japan's figure of 8. The overall global birth rate was 18.65 in 2017, according to the World Bank.
In 1979, the Chinese government introduced a nation-wide "one-child policy" - with various exceptions - to slow population growth. Families that violated the rules faced fines, loss of employment and sometimes forced abortions.
But the policy has been blamed for a severe gender imbalance - with males still outnumbering females by more than 30 million in the 2019 figures. In 2015 the government ended its one-child policy allowing couples to have two children. But that reform has failed to reverse the country's falling birth rate - despite a two-year increase immediately afterwards.
Experts say this is because the relaxing of the policy did not come with other relevant changes that support family life - such as monetary support for child care and increased paternity leave.
Media captionJohn Sudworth examines the painful legacy of China's one-child policy Introduced in 1979, the policy meant that many Chinese citizens - around a third, China claimed in 2007  could not have a second child without incurring a fine.
In rural areas, families were allowed to have two children if the first was a girl. Other exceptions included ethnic minorities and - since 2013 - couples where at least one was a single child.
Campaigners say the policy led to forced abortions, female infanticide, and the under-reporting of female births. It was also implicated as a cause of China's gender imbalance
---AP, China