US Ambassador to South Korea Harry Harris
The US ambassador to South Korea drew criticism from the highest levels of government in Seoul on Friday for suggesting that Seoul consult with Washington about the possibility of reopening tourism with North Korea.
US ambassador Harry Harris has even been criticized by some local media and anti-US activists over his moustache, which they have compared with those of officials in the Japanese colonial government that ruled Korea from 1910 to 1945.
Seoul and Washington have been at odds over a number of issues in recent years, including South Korean President Moon Jae-in's desire to engage economically with the North., and a U.S. demand that Seoul pay billions of dollars more to maintain its troops stationed in South Korea.
Harris told international media in Seoul on Thursday that it would be better for South Korea to run any plans to engage with North Korea through a joint working group established with the United States to avoid any "misunderstandings" that could trigger sanctions.
That drew a rebuke from an official at the presidential Blue House on Friday. "It's very inappropriate for the ambassador to make such a mention in the media over remarks by the president of the host nation," the official said, speaking to media on condition of anonymity.
Harris said South Korea was a sovereign nation and noted that tourism is not banned by international sanctions imposed on the North. But he said some aspects of a tourism program could potentially run into trouble with sanctions. A spokesman for the South's Unification Ministry, which handles relations with the North, declined to comment specifically on Harris' remarks but said "our policy with regard to North Korea comes under our sovereignty."
Others criticized Harris more directly, with some even commenting on his Japanese-American heritage. Harris was born to a Japanese mother and an American father. In an interview with a local radio station, a ruling party lawmaker compared him with a "governor general" of the Japanese government during the colonial period.
Speaking on Thursday, Harris also mentioned the public comments about his heritage and the mockery of his moustache - despite the fact that many famous Korean historical figures had similar facial hair. "My moustache, for some reason, has become a point of some fascination here," Harris said at the briefing on Thursday.
In a protest outside the US Embassy in December, for example, activists plucked the moustache hairs from posters of Harris' face. "I understand the historical animosity that exists between both of the nations," Harris said of the lingering tensions between South Korea and Japan."But I am not the Japanese-American ambassador to Korea I am the American ambassador to Korea."
---Reuters, Seoul 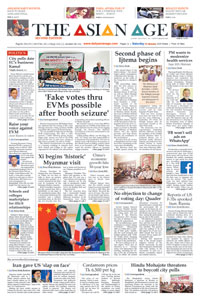