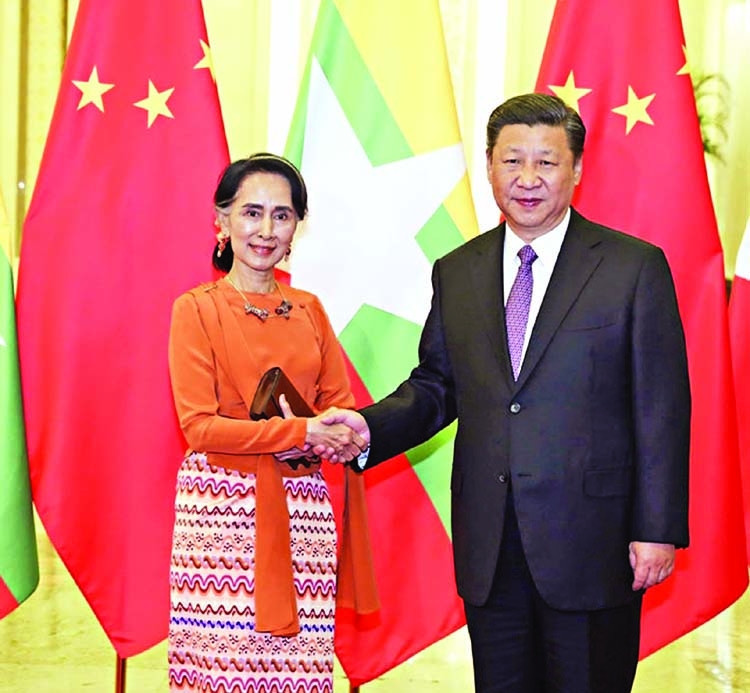 Chinese President Xi Jinping and Myanmar State Counsellor Aung San Suu Kyi had a cordial and friendly talk at Myanmar's presidential palace on Friday. - EPA
President Xi Jinping had a short meeting with Myanmar State Councilor Aung San Suu Kyi on Friday after a welcome ceremony for his visit, hosted by his Myanmar counterpart U Win Myint.
During the meeting, the two leaders had a friendly chat and agreed to hold talks on Saturday to exchange views about bilateral relations and other issues of common concern.
Xi arrived in Nay Pyi Taw on Friday for a state visit to Myanmar. Two Myanmar fighter jets escorted Xi's plane as it entered the country's airspace.Myanmar's First Vice President U Myint Swe and several cabinet ministers warmly welcomed Xi upon his arrival at the Nay Pyi Taw International Airport.
Upon his arrival, Xi extended sincere greetings and good wishes to the government and the people of Myanmar on behalf of the Chinese government and the Chinese people.
During his two-day stay, Xi is scheduled to attend a series of state events held by U Win Myint, hold talks with Aung San Suu Kyi, meet with Commander-in-Chief of Defense Services Min Aung Hlaing, and exchange views with the leaders of Myanmar's parliament and political parties.
Xi will also join Myanmar leaders in a series of celebrations to mark the 70th anniversary of bilateral diplomatic ties and the launching ceremony of the China-Myanmar Culture and Tourism Year program.It is Xi's first overseas trip this year, and the first visit to the Asian neighbor by a Chinese president after an interval of 19 years.
Xi said he looks forward to renewing China's close ties with Myanmar and discussing future cooperation during a trip to the Southeast Asian country in a signed article titled "Writing a New Chapter in Our Millennia-Old Pauk-Phaw Friendship", published on Thursday in Myanmar newspapers ahead of his two-day state visit.
Pauk-phaw, which means siblings from the same mother in the Myanmar language, "is an apt description of the fraternal sentiments between our two peoples, whose close ties date back to ancient times", Xi said.
Myanmar was among the first countries with a different social system to recognize the People's Republic of China after its founding in 1949.Xi said that the elder statesmen of the two countries have since made enormous efforts to develop China-Myanmar relations.
"Our relationship has been marked by mutual trust, mutual respect and mutual support. It has become a prime example of equality, win-win cooperation and common development between countries of different sizes," he wrote, noting that the close ties have delivered real benefits to people in both countries.