An interview with Sarah Waters 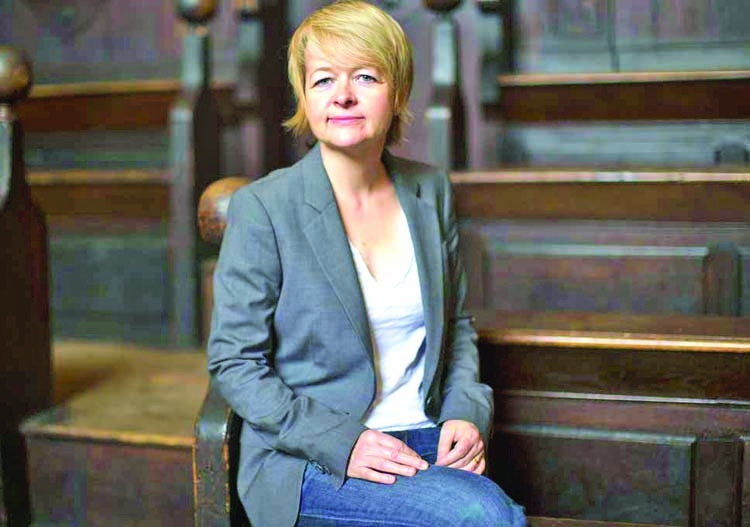 Ron Hogan: Had you been writing fiction when you were younger, before you started working on your advanced degrees in literary studies? Sarah Waters: No, not at all. It was only through doing the Ph.D. thesis that I was able to go on and do the fiction; it gave me the discipline and the confidence to write. As soon as I finished the thesis -- well, I'd had the idea for the first novel,
Tipping the Velvet, while I was writing the thesis, and I tried to start writing the novel too, but it was too hard to be doing two things at once. So as soon as I finished, I gave myself a year to try and write the novel, and it was like, "Oh my God, can I even write fiction at all?" It took about 18 months altogether. I suppose I'd done some research before for the thesis that I could use, but as I went along I did research for the other sections, too.

Ron: What was your field of study?
Sarah: It was lesbian and gay literature, modern lesbian and gay writing from roughly the late nineteenth century. In that sense it really led straight into the novels, or rather the novels came out of the kinds of thinking I was doing.

Ron: What interested you specifically in the late Victorian setting when you started that first novel?
Sarah: I touched on it when I was doing the thesis, looking at gay men's writing from the period -- there's quite a lot of it, and it was very identifiable, you know, Wilde and the people around Wilde, and so on. It's a hinge time between earlier nineteen century stuff which is really quite foreign to us and the modernist stuff, as well as a time when we began to get a recognizably modern gay subculture.
I thought about what there might be around for women, lesbians of the period, and so the music hall, male impersonation...I got into what that might mean for women viewers and for the women doing it. I have read a lot, and do still read a lot, of Victorian fiction because it's a way of really getting into the period -- simply immersing yourself in it. I found it came quite naturally in a way to write in a Victorian style.

Ron: How did you get the idea for the second novel, Affinity?
Sarah: The first one is very upbeat, you know, kind of a romp. I began to think it would be interesting to write something that was a bit grimmer and a bit darker. I've been interested in spiritualism for a long time. I was writing a academic article on it when I finished Tipping, though even before that I'd been interested in it as a phenomenon. And I'd been very interested in prisons, too, so I just saw this possibility of bringing the two things together, prisons and spiritualism, which at first seemed quite arbitrary.
Sarah Waters (born 21 July 1966) is a Welsh novelist and lives in Kennington, south-east London. She is a three-time Man Booker Prize shortlisted author. She is best known for her novels set in Victorian society and featuring lesbian protagonists, such as Tipping the Velvet and Fingersmith. Before writing novels, Waters worked as an academic, earning a doctorate and teaching. Waters went directly from her doctoral thesis to her first novel. It was during the process of writing her thesis that she thought she would write a novel; she began as soon as the thesis was complete. Her work is very research-intensive, which is an aspect she enjoys. Waters was briefly a member of the long-running London North Writers circle, whose members have included the novelists Charles Palliser and Neil Blackmore, among others. With the exception of The Little Stranger, all of her books contain lesbian themes, and she does not mind being labelled a lesbian writer. Her prose quite deftly captures the voice of British novels of the period, but it's her rich characterizations -- and, in Affinity, her skillful development of suspense -- that have garnered the novels critical praise from mainstream
As I began to write, though, I began to see connections and overlaps between them institutions. It was also a question of doing something more or less in the same period as Tipping, but very different in that while the first novel deliberately had a wide range of models for lesbian communities, I wrote Affinity with characters who for the most part didn't have any lesbian models at all.
There's Margaret's isolated and unreturned passion, and there's the world with the prisons which obviously could breed quite strong female attachments which you wouldn't necessarily call lesbianism, attachments that could be erotic or non-erotic, but very intense either way. And spiritualism too allowed for the possibility of quite queer things going on -- I mean queer in every sense of the word, including the erotic. You had women impersonating male spirits and with that potential for contact in a spiritualist setting between women, I was intrigued.

Ron: When you were researching the spiritualist world, did you run into examples of the "sexual therapy" for unknowing lesbians you describe in the novel?
Sarah: Not explicitly, no, but the whole idea of affinities intrigued me. There was certainly a lot of talk around the idea. Spiritualist were often charged with being anti- marriage and pro-divorce, because they'd argue that you could marry the wrong person, that you could have an affinity with someone else, and so you should be allowed to break these temporal bonds for the sake of the longer lasting affinity.
So some spiritualists certainly took a more liberal approach to relationships, but I didn't really actually come across in my research evidence that that was being used by lesbians or gay men in support of their own relationships. Still, I began to see it as a possibility. And, too, one of the big nineteenth century male spiritualists had quite a strange relationship with a young aristocrat, and it's quite possible to read between the lines of the literature around them and conclude that there was something erotic going on.

Ron: Are you staying with the Victorian era for your next novel?
Sarah: Yes, but slightly earlier, in the 1860s this time. I feel I've gone just about as Victorian as I can possibly go with this new book. It's lighter than Affinity, more of a melodrama, drawing from the melodramatic sensation fiction of the period. It's been good fun to write, more so than Affinity which is quite grim to write. But I think after this I might leave the Victorian area for awhile.

Ron: That must be a rather daunting prospect.
Sarah: But it's a challenge as well, and I think I've got to a point where it would be good for me to take on a different idiom, to be drawing upon a different set of traditions.

Ron: And you don't want to be typecast.
Sarah: No, I don't. I was worried about that, what with doing these two and then another one. But then there's something about three -- they're not a trilogy, but there's still a sense of completion to having written three and then moving on.

Ron: You've stopped doing academic research, though I gather that you've continued to teach. Do you want to go back to the academy at some point, or is it pretty much creative writing from this point onward?
Sarah: I stopped teaching actually. I want to press on with the writing for the foreseeable future. The academic world is such that when you're teaching, you really need to be researching and publishing as well, and once you've left, it's impossibly difficult to get back in and catch up with what's happened in the field since you left. But I've done creative writing teaching recently for the first time, and I might pursue that a bit more if I get the chance.

Ron Hogan is a literary contributor.
The interview appeared in www.indiebound.org