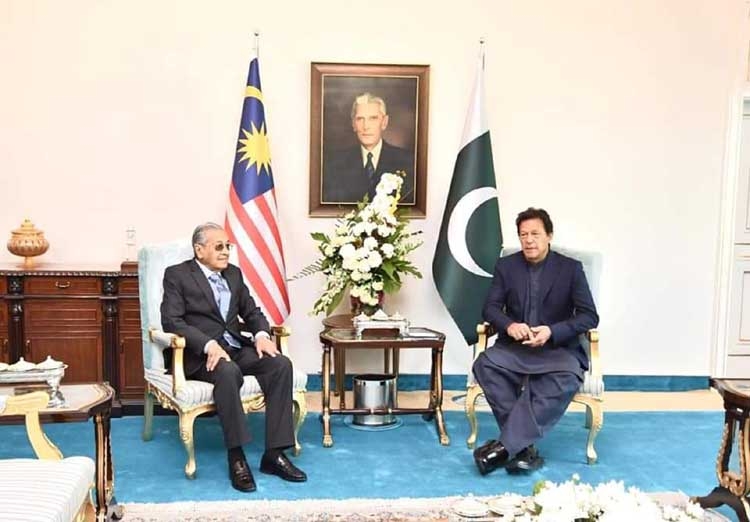 Pakistan Prime Minister Imran Khan's ongoing visit to Malaysia, leading a large delegation and holding a wide range of talks is indicative of a new dynamic emerging equation between Pakistan and Malaysia.
This development need not be seen as surprising as both the countries have been warming up to each other for the last couple of years. In March 2019, Malaysian Prime Minister Mahatir Mohammad attended the Pakistan national day celebrations and took one step forward to further befriend Pakistan forging a new bilateral ties.
Subsequently, Mahatir, at the express promoting of Imran Khan, chose to speak in the United Nations General Assembly last September, joining the bandwagon of Turkish President Erdogan, criticizing India over issues in J&K. We see J&K becoming a rallying point for Mahatir to signal Pakistan that the firmer was supportive of the latter in its stance on J&K.
Turkey was marginally put on the defensive by India's diplomatic offensive by accusing Turkey of committing excesses in Armenia and Greece. However, Mahatir continued his tirade against India by leveling a brazen charge that it had invaded Kashmir. The nonagenarian Malaysian leader, who was hitherto not known to be so much anti Indian, continued with his anti India rhetoric.
This was further compounded by his hardened stance in incessantly refusing to entertain repeated Indian requests of deporting hate preacher Zakir Naik to India wanted in several criminal cases. While such moves carried India away from Malaysia, it brought Malaysia and Pakistan closer than before. Amid such growing equations between the two countries, India remained a target of frequent vilification.
Against this backdrop Imran's current visit to Malaysia assumes huge growth political significance strengthening their bilateral axis. On his part, Imran also needed a shoulder to rest his head to cry upon which was conveniently offered by Mahatir.
Further, it was imperative on Imran's part to do some damage control as he was seen in his own country and among the cohorts of Mahatir and Erdogan to have sheepishly succumbed to the Saudi pressure by abstaining from participation in the high voltage Kuala Lumpur Islamic summit held end of last year.
At the ongoing Malaysia visit, Imran admitted to his Malaysian hosts that he had a misconception that KL summit might weaken the Islamic unity but that was clearly a misunderstanding. Analysts are reading this as a clear expression of unqualified apology rendered to Mahatir to clinch the hand of friendship as Pakistan is desperate to have a friend in Imran's world of complete isolation.
The country and its Prime Minister is also at a tight spot due to impositions by Financial Action Task Force (FATF) placing it in the grey list. If not material, Pakistan at least is in dire need of a moral support and here, Malaysia comes real handy.
While in Malaysia, Pakistan appropriated opportunity by assuring Malaysia that it would buy palm oil from the latter to meet the shortfall caused by India's restrictions boycotting Malaysia to import refined palm oil. It's, however, a big if as Pakistan today is undergoing a severe economic crisis and its foreign exchange reserves are very low.  A slew of trade related issues were talked between the two countries aimed at reducing the trade barriers and boosting economic cooperation.
Another aspect worth taking note of in the light of growing ties between Pakistan and Malaysia is signing of an Extradition Treaty between the two countries. Pakistan side was represented by its Foreign Minister, Shah Mahmood Quereshi and Malaysian Law Minister Liew Vui Keong. This treaty is being accorded much importance than perhaps it deserves, as far as merit is concerned. It's being described as part of a cooperative law enforcement process among these countries.
Mahatir Mohammad gave a high sounding definition to the development by saying that this treaty reinforced positive momentum to bilateral relationship by enhancing security and transnational crime cooperation. Every sphere of bilateral activity between the two seems to be capitalized to cement ties. Imran also averted that one Pakistani national charged with murder was extradited to Pakistan much before the treaty was signed.
Using the Malaysia as a convenient turf to ventilate his perceptions, Imran Khan praised Islam and said that its tenets were needed to be conveyed to the western countries to dispel misgivings. Experts feel such statements lack depth and are just part of gimmicks to play the religion card. Imran Khan also disclosed that Pakistan was working in many proactive media projects to highlight 'strong' points of his country's religion.
What's important that Imran spoke in Kuala Lumpur was his avid anti India remarks focusing on Kashmir. He also seems to have exceeded his diplomatic niceties by saying that as soon as he assumes office in 2018, he had extended his hand of friendship to India.
In the same vein, he accused India of pursuing ideology of a particular religion and further came forward perhaps with another unsavory remark that if there is ever a government with a different political ideology in India, he would make friends with it.
Such comments may have augured well with Malaysia but unbecoming of a stature of a Prime Minister. This and other aspects discussed above, clearly show that Pakistan and Malaysia, in midst of their new emerging equations, find it politically convenient resorting to bashing of non Islamic countries, mixing it with religion.

The writer is a security analyst and a columnist on topical issues.  He is also a former National Security Advisor to the Prime Minister of Mauritius. The views expressed are personal