'No alternative to dev of skill for further growth' 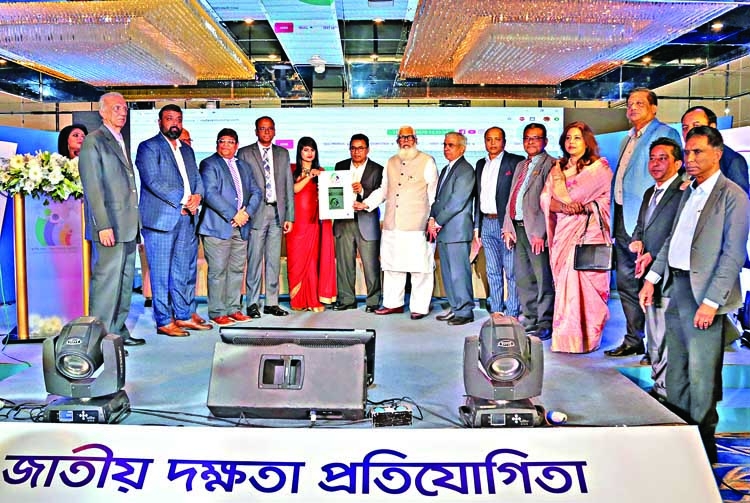 Finance Minister AHM Mustafa Kamal with others inaugurating the National Skills Competition organized by The National Skills Development Authority (NSDA) at a hotel in the capital on Saturday. Prime Minister's Private Industry and Investment Adviser Salm
Finance Minister AHM Mustafa Kamal said there have no alternative to develop skill of workforces widespread and everywhere in the country for achieving the expected growth.
He said the government has taken all out move in this regard and accordingly established the National Skill Development Authority (NSDA) and other relevant bodies who are working relentlessly to materialize the government's vision.
He made these remarks at the inaugural ceremony of National Skills Competition which was launched at a city hotel on Saturday.The NSDA under the Prime Minister's Office (PMO), is going to launch National Skills Competition across the country to facilitate development and enhancement of skills of the large workforce of Bangladesh at all trades to global standards.
AHM Mustafa Kamal inaugurated the competition as the chief guest while Prime Minister's Private Industry and Investment Adviser Salman Fazlur Rahman delivered speech as special guest. Asian Development Bank Country Director Manmohan Parkash spoke as guest of honor while the PMO Secretary Md Tofazzel Hossain Miah chaired the program and delivered concluding speech. NSDA Executive Chairman Md Faruque Hossain delivered vote of thanks.
Speaking at the event, Md Faruque Hossain said, the NSDA is providing skills enhancement of the country's workforce through regulating skills training institutes by designing, planning and approving training and skills module, setting standards of skills, creating national-level awareness through various activities at central, divisional, district and upazila levels and also participating at events, programs and competitions at international arena.
The competition will create an opportunity for the young segment of the population to enhance their skills, and up-skill and re-skill for making them more capable to explore jobs both at home and abroad and these contribute to income generation and boost the economy as a whole.
Skills training in Bangladesh is facing a setback. Parents are often unwilling to send their children to pursue skills training because they don't realize it's value. Trainees themselves rarely aspired to be trained in the technical and vocational stream because they wrongly perceive it is a place for low-achiever. This hinders the government to achieve its target to create skilled workforce, but to face major challenges in the next generation job market and benefit from the demographic dividend, this mindset needs to be changed.
Considering this, NSDA is going to observe the centenary of the father of the nation Bangabandhu Sheikh Mujibur Rahman by organizing 'Divisional and National Skills Competition' as a part of the communication and mobilization activities of NSDA for disseminating and popularizing skills training in Bangladesh, said NSDA chief.
"Prime Minister has already given her kind consent to organize the competition to be held in two phases. In the first phase, divisional competition will be held in eight divisional headquarters in 20 (twenty) trades. The winners will finally compete in the National Skills Competition to take home 'Bangabandhu Skills Prize' to be held in Dhaka," Faruque added.
The trades include concrete construction work, carpentry, electrical installation, plumbing and heating, painting and decorating, wall and floor tiling, brick laying, plastering and dry wall, hair dressing, cooking, beauty therapy, bakery, patisserie and confectionery and restaurant service, fashion technology, floristry, graphic design technology, web design and development, IT software solutions for business and welding.