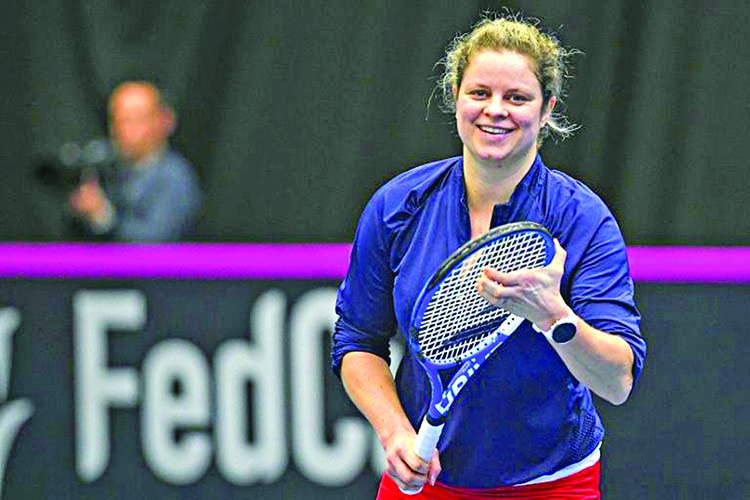 Clijsters, pictured in training this week, returns in Dubai. -AFP
Four-time Grand Slam winner Kim Clijsters announced Sunday she will return after seven years in retirement at the WTA tournament in Dubai starting on February 17. The 36-year-old former number one, who hung up her racquet after the 2012 US Open, said: "I am so thrilled to be returning to the court. "I'm impatient to resume this sport which I love, in front of the fans."
The Belgian described as "extraordinary" the support and encouragement she'd received since announcing her return in September. Clijsters had originally planned to make her return at last month's Australian Open. A knee issue scuppered that plan, with Mexico in March then proposed as an alternative, before she accepted an invitation from the Dubai organisers.
The holder of 41 titles, including three US Opens (2005, 2009 and 2010) and one Australian Open (2011), turned professional in 1997, the year before the birth of recently crowned Australian Open champion Sofia Kenin.

She reached the world number one ranking for the first time in 2003, and for the last time in February 2011. Retiring for a first time in May 2007 she returned in August 2009 after giving birth to her first child. Her total prize money earnings of almost $24.5 million puts her 12th in the all time women's prize money charts.
One fan who believes Clijsters can still achieve a significant amount despite the passing of time is Roger Federer. The Swiss great, speaking at the Australian Open, said: "I think age doesn't matter, to be honest. I think it's the fitness and the mind that matters."So I think a lot is possible, even though there should be no expectations from her side and from anybody else."
---AFP, Brussels