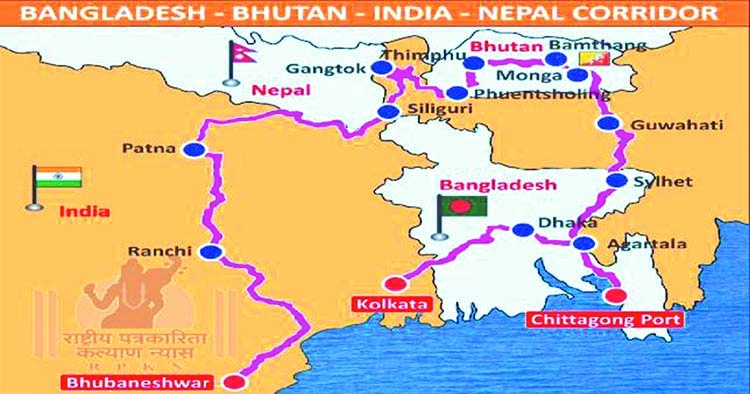 Bangladesh, Bhutan, India and Nepal have agreed upon the need to expeditiously finalise the Passenger and Cargo Protocols for implementation of the BBIN Motor Vehicles Agreement (MVA) on Saturday.
The first meeting of the group in two years discussed the protocols that are to give effect to MVA for the Regulation of Passenger, Personal and Cargo Vehicular Traffic between Bangladesh, Bhutan, India and Nepal (BBIN), signed on 15 June 2015, according to a joint statement.
During their January 2018 meeting in India's Bengaluru, the group discussed the two protocols. Representatives of Bhutan participated in Saturday's meeting in New Delhi, India in an observer capacity as decided by the country earlier. The Bangladesh delegation was led by Mohammad Sarwar Mahmood, director general (South Asia), foreign ministry.
The delegations recalled commitments made at the highest political level for implementation of the BBIN Motor Vehicles Agreement and the importance of trade, economic cooperation and people-to-people contact, through enhanced regional connectivity.They expressed satisfaction over progress made by each country in internal consultations with their stakeholders for the Protocol for movement of Passengers, the statement said.

They also discussed various aspects of the draft Protocol for movement of cargo vehicles, discussing the existing draft text jointly for the first time. The three delegations reaffirmed their understanding that the BBIN MVA safeguards the rights and obligations of all parties under other international agreements and bilateral agreements within the group.
The delegations also discussed a draft enabling MoU to be signed by Bangladesh, India and Nepal for implementation of the BBIN MVA by the three countries. They agreed to consider expediting the finalization of this MoU, expressing gratitude to Bhutan for offering its consent in this regard.