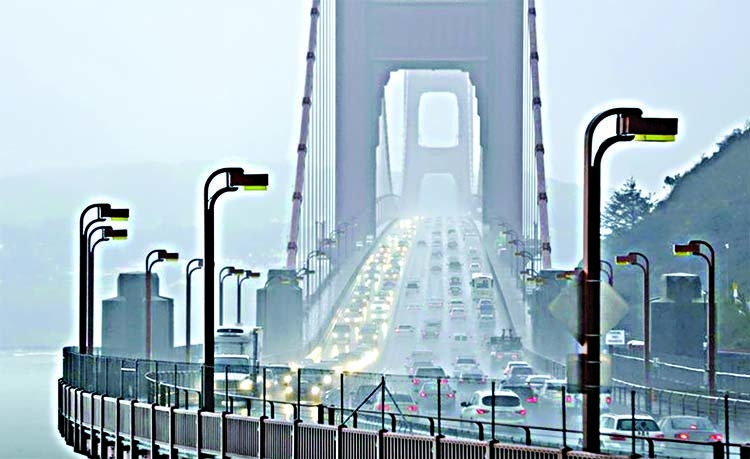 Traffic crosses the Golden Gate Bridge in the rain in this view from Sausalito, Calif. The Trump administration has ended its antitrust probe into a deal between California and four big automakers. -AP
The Trump administration has ended its antitrust probe into a deal between California and four of the world's biggest automakers, after failing to find that the companies' conduct violated the law.
The Justice Department's investigation, which started last fall, had aimed to determine whether antitrust laws were violated by Ford, Honda, Volkswagen and BMW in reaching the July deal with California. Under the deal, the automakers planned to comply with pollution and related mileage requirements established by California that are tougher than the federal standards sought by President Donald Trump.
The Justice Department didn't find conduct violating the law and has closed the investigation, a person familiar with the matter told The Associated Press on Friday. The person spoke on condition of anonymity because they weren't authorized to speak publicly.
In September, the administration revoked California's authority to set auto mileage standards, asserting that only the federal government has the power to regulate greenhouse gas emissions and fuel economy. Top California officials and environmental groups took legal action to stop the rollback.
Democrats accused the administration of using antitrust powers to target political opponents with the investigation. A top Justice Department official defended the probe before Congress and denied any political motivation or influence from the White House.
California Gov. Gavin Newsom, a Democrat, said Friday that the Justice Department's "trumped-up charges were always a sham - a blatant attempt by the Trump administration to prevent more automakers from joining California and agreeing to stronger emissions standards."
Newsom called the closing of the probe "a big loss for the president and his weaponization of federal agencies." California's authority to set its own, tougher emissions standards dates back to a waiver issued by Congress during passage of the Clean Air Act in 1970.
The state has long pushed automakers to adopt more fuel-efficient passenger vehicles that emit less pollution. About a dozen states and the District of Columbia also follow California's fuel economy standards.
The deal struck by the state and the automakers bypassed the administration's plan to freeze emissions and fuel economy standards adopted under President Obama at 2021 levels.
---AP, Washington