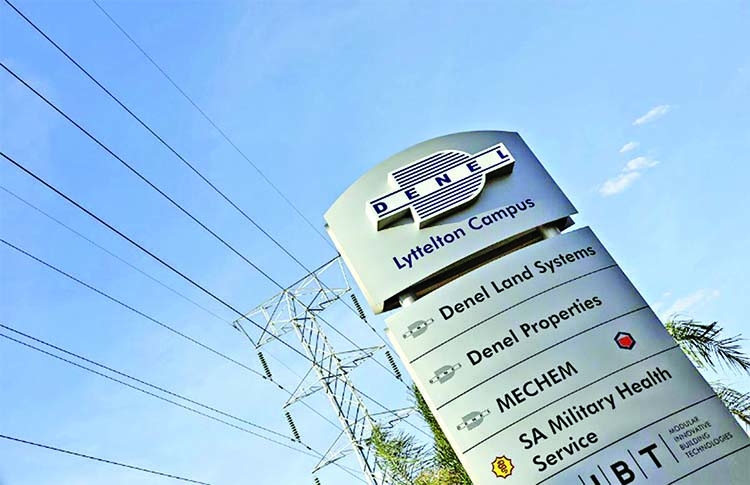 A Denel company logo is seen at the entrance of their business divisions in Pretoria, South Africa. -Reuters
South Africa aims to free up over a billion dollars in stalled weapons sales, including to Saudi Arabia and United Arab Emirates, by amending a document at the heart of an export row, a senior arms control official told Reuters.
Local defense firms have lobbied the government for months to change a clause in the export document requiring foreign customers to allow South African officials to inspect their facilities to verify that weapons aren't being transferred to third parties.
mSaudi Arabia and the UAE buy at least a third of South Africa's arms exports and have been engaged in a war in Yemen. They refused to agree to the inspections because they considered them a violation of their sovereignty, industry officials told Reuters in November.
"I can confirm that the amendment of the end-user certificate was approved by the NCACC recently," Ezra Jele, the head of the secretariat of South Africa's National Conventional Arms Control Committee (NCACC), told Reuters.
A draft letter from Jele to a defense industry association obtained by Reuters and authenticated by two industry sources said the NCACC planned to replace a clause allowing for "on-site verification ... performed by an inspector designated by the (defense) minister."The new clause would state "on-site verification of the controlled items may be performed, through diplomatic process".
Defense sources said the changes were aimed at assuaging the concerns of importing nations that objected to the original wording, in the hope that exports could resume. Before it takes effect, the amendment must be published in the government gazette.
But the letter stated that permission was being sought from the defense minister for companies to use the new language in the interim. Jele declined to comment on the letter, as did the head of the industry association to whom it was addressed.

South Africa has sought to reform its defense industry - once a pillar of the racist apartheid regime - by making export approvals subject to human rights considerations. It has long included a clause in its end-user certificates requiring on-site inspections, though it was rarely acted upon.
But in 2017, arms control officials moved the clause to the front page of the certificates, and countries including Saudi Arabia, the UAE, Oman and Algeria refused to sign them.
Exports to the Gulf and North Africa are a key source of revenue for local defense companies including state-owned Denel, Paramount Group and Rheinmetall Denel Munition, a joint venture between Denel and German industrial giant Rheinmetall (RHMG.DE).Defense firms threatened hundreds of job cuts if the wording of the clause wasn't changed to resolve the row.
---Reuters, Johannesburg