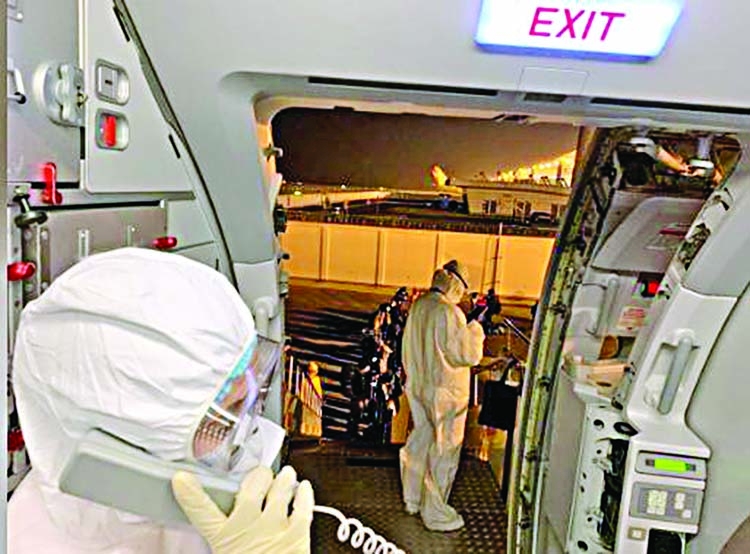 Filipinos, voluntarily evacuated due to the coronavirus outbreak, board a plane from Wuhan, Hubei, China on Sunday. -Reuters
Thirty Filipinos returned to the Philippines on Sunday from Wuhan City in China's Hubei province, the epicenter of a coronavirus outbreak that has killed more than 800 in the mainland, the Department of Foreign Affairs (DFA) said.
Twenty-nine adults and an infant flew on a chartered flight arranged by the foreign affairs and health departments which landed in Clark Air Base, located about 40 miles northwest of the capital, Manila.
The returning passengers and a 10-member government team were transferred from the plane into buses that brought them to the nearby Athlete's Village in New Clark City in Tarlac province for a 14-day quarantine, the DFA said in a statement. There were about 300 Filipinos in Hubei, based on the Philippine government's estimate, but it said not all had wanted to be evacuated.
The Philippines has reported three positive cases of the coronavirus infection in the country, including a 44-year-old Chinese man who had traveled from Wuhan and died in a government-run hospital in Manila after developing severe pneumonia.
There were more than 230 "patients under investigation" for coronavirus infection in the country as of Saturday, including around 100 in Manila, according to the health department. The first case was the "travelling companion" - reported to be the girlfriend - of the 44-year old Wuhan man who died from the virus on 1 February.
It is the first and only death from coronavirus outside China and Hong Kong. The Philippines reported three cases. The third, a 60-year-old woman also from Wuhan, was belatedly confirmed after she had left the country. The health department said she appeared to have recovered from the coronavirus.
She was discharged after samples sent to Australia tested negative. But a belated test of an earlier sample, conducted after the country acquired capability for local testing, was positive. There is no known transmission in the country but more than 200 cases are being monitored for possible exposure to those that have been confirmed.
Bishop Pabillo also urged Christians to make their contribution through prayer.  He noted that "all through history we have seen that plagues have been stopped not only through medical means but also through prayers and great acts of charity".
"Wherever we are, in whatever state of life, in sickness and in health, we all can pray," he said, urging prayers for those who have died and comfort for the bereaved.  "The power of solidarity in prayer and in charity," he said, is a big resource that Christians have.
---Reuters, Manila