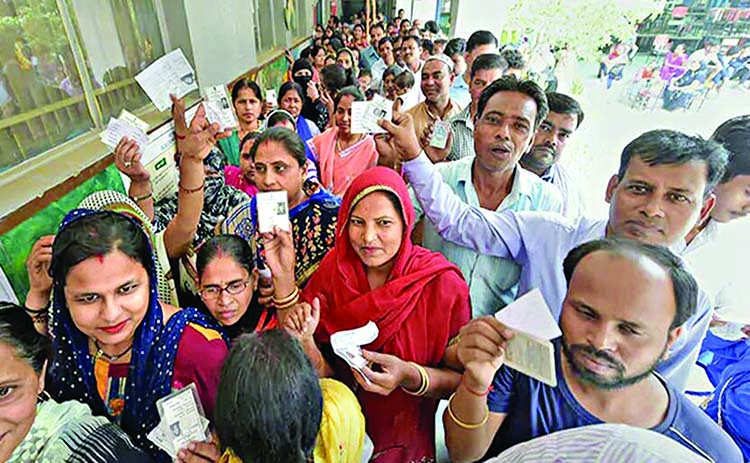 Delhi election turnout has been recorded at 62.59%. -NDTV
The turnout in the Delhi assembly election was 62.5 per cent, the Election Commission said on Sunday - more than 24 hours after voting and much concern about tampering of Electronic Voting Machine from the Aam Aadmi Party. The provisional figure given out yesterday was 57 per cent.
Chief Minister Arvind Kejriwal had questioned the delay in a tweet this afternoon. "Absolutely shocking. What is EC doing? Why are they not releasing poll turnout figures, several hours after polling?" his post read, reports NDTV. Asked about the matter, the Election Commission said the final figures came out in "good time".
"It is a process, as and when it is finalised, it is shared with you," said Chief Election Officer Ranbir Singh. The data, he said, had to be collated through the night and the Returning Officers were busy.
AAP has claimed that efforts are being made to tamper with the Electronic Voting Machines and tweeted videos to back the claim. Regarding senior AAP leader Sanjay Singh's allegation of irregularities at a polling station at Babarpur, the Commission said the machines in question were reserve machines, which were not used for polling.
The official seen with the video was assigned two places and issued two sets of machines, the election officer said. "He had kept one machine at one place and the other on the second. He had to walk 700 meters. He first went to the place which was near and then he took the other machine. The official was taking the machines when some people accosted him," he added.
The polling figure this time is short of last time's turnout of 67.5 per cent. Mr Singh, however, pointed out that the figure is about two per cent more than the Lok Sabha election. In Vidhan Sabha, the turnout was 67 per cent.