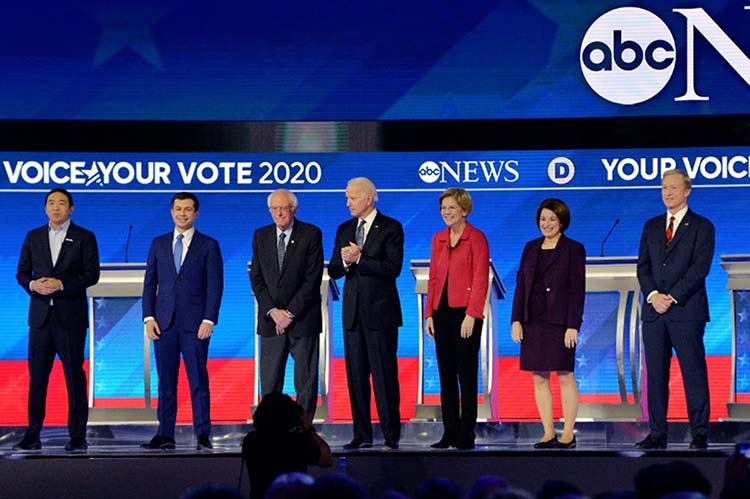 (From L) Democratic presidential hopefuls Andrew Yang, Pete Buttigieg, Bernie Sanders, Joe Biden, Elizabeth Warren, Amy Klobuchar and Tom Steyer arrive onstage for the eighth Democratic primary debate of the 2020 presidential campaign. -AFP
Democratic hopefuls fanned out across snowy New Hampshire on Saturday campaigning for the state's primary, stop two on the road to picking a challenger to President Donald Trump in November.
The burst of glad-handing ahead of Tuesday's vote in the small, predominantly white northeast state came with leftist Senator Bernie Sanders and 38-year-old moderate Pete Buttigieg having emerged in a dead heat atop the field in last week's messy Iowa caucus. And in line with their position as frontrunners, both came under sustained attack from their rivals at a feisty debate on Friday night.
Sanders, 78, was challenged over his age and record on guns, while Buttigieg the former mayor of a midwest town of 100,000 was depicted as too young and inexperienced to be the party's choice to take on Trump and deny him a second term.
When it was all over, none of the seven men and women who took to the stage was seen as having scored a knockout punch or made any serious mistake. And Buttigieg, a political nobody at the national level a year ago but now a force to be reckoned with, seemed to revel in his new status.
"What I will say is that we're definitely in it to win here in New Hampshire, and we are competing because you know, New Hampshire is a state that thinks for itself, famously independent-minded state," Buttigieg said.
Sanders, a veteran senator calling for "political revolution," found himself in the firing line from former vice president and fellow septuagenarian Joe Biden, who branded his policies too radical to unite Americans.
The 77-year-old Biden, fighting to keep his White House hopes alive after finishing an unnerving fourth in Iowa, insisted that liberal policies like Sanders's flagship universal health care plan would be too divisive, expensive and difficult to get through Congress.

"How much is it going to cost?" Biden asked about Sanders's Medicare for All bill, which estimates the project would cost tens of trillions of dollars."Who do you think is going to get that passed" in Congress?
Biden performed more aggressively than in previous showings, seizing a chance to argue that today's global tensions required an experienced statesman to guide the nation out of a dark period.
Despite the Iowa setback, he also made plain he still views himself as best-placed to mount a centrist challenge to the Republican Trump, who this week survived an impeachment trial that did little to dent his electoral support.
But Biden all but conceded defeat in New Hampshire."I took a hit in Iowa, and I'll probably take one here," Biden said. He noted that in 2016, Sanders, who represents neighboring Vermont, won the New Hampshire primary by 20 points.
At a Biden rally Saturday, Erin Kerry, a 49-year-old financial analyst from neighboring Massachusetts, said she wished Biden had done better in the debate. But she added, "I'm not ready to count him out yet."Cameron Landry, a 24-year old-student, said he liked Biden's experience but questioned whether he had the grit to take on Trump.
"I think we need somebody with a lot of energy. I think we need somebody that can compete with the reality star. People love reality TV. It's a dumpster fire and people want to watch," Landry told AFP.
Also onstage in New Hampshire were Senator Elizabeth Warren, entrepreneur Andrew Yang and billionaire activist Tom Steyer.Klobuchar, a pragmatist from Minnesota, put in a forceful performance as she voiced her opposition to Sanders and Warren, arguing their liberal plans would only divide voters.
"Truthfully, Donald Trump's worst nightmare is a candidate that will bring people in from the middle," she said.After New Hampshire, the candidates turn to Nevada on February 22, South Carolina on February 29 and then Super Tuesday on March 3, when 14 states vote.
--- AFP, Washington