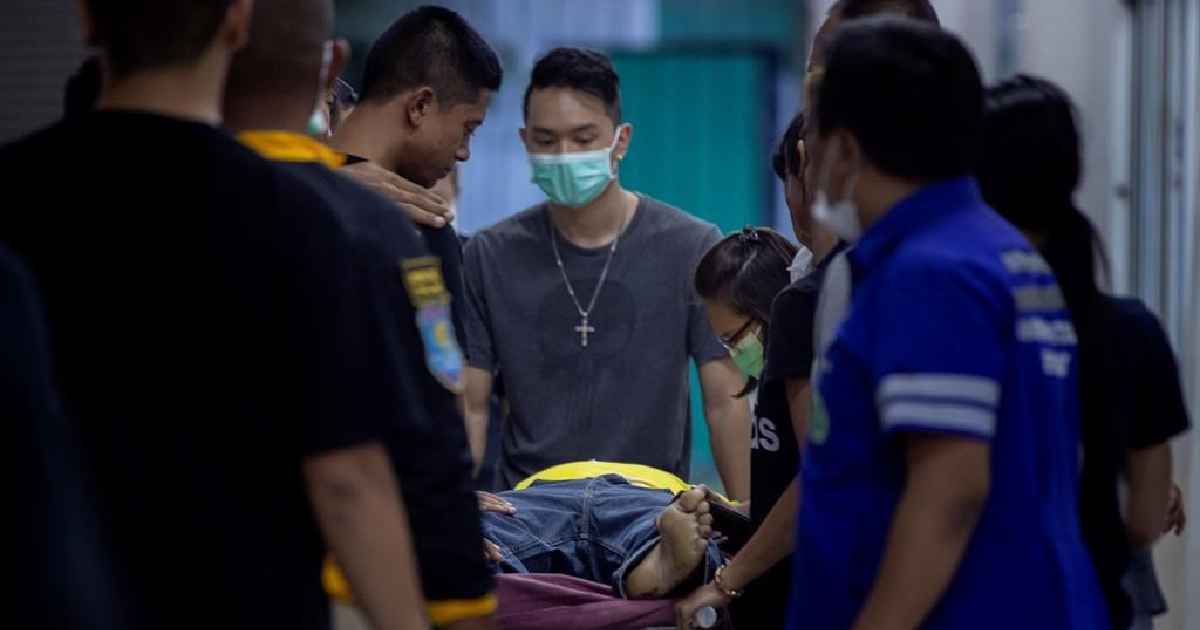 Sirirat Nualraksa blinked back tears as the ambulances delivered gurneys bearing cloth-shrouded bodies to the morgue of a public hospital after a vengeful Thai soldier killed 29 people and wounded dozens of others in a shopping mall rampage.
Sirirat lost her sister, brother-in-law and young nephew in the attack. She was among dozens of victims' relatives sitting in plastic chairs and on concrete benches outside the morgue Sunday, waiting to fill out paperwork to lay claim to their loved ones and receive compensation from the Thai government's criminal victims' fund.
On Facebook, she had talked with her sister, 33-year-old Papatchaya Nualraksa, as she hid with her husband and their 2-year-old in a supermarket storage room. Sirirat advised her sister to nurse her son so he wouldn't make noise and risk revealing the family to the gunman, whose rounds of automatic fire echoed around the seven-story mall.
In a Facebook call, Papatchaya told her sister that she was scared.
"Gunshots could be heard endlessly and loudly. But there was no sign" of a rescue, Sirirat said. Still, "both of us thought that she would be able to get out."
They exchanged several Facebook messages before Papatchaya went quiet.
About 13 hours later, the standoff ended when Thai special forces fatally shot the gunman, whom authorities identified as Sgt. Maj. Jakrapanth Thomma.
Sirirat, 43, later received photos from a friend, an officer who responded to the mall, of the body of her sister, arms wrapped around her 2-year-old, and the boy's father nearby.
At the hospital, a team from the government mental health department handed out cake and tissues, screening people for abnormal expressions of grief, according to Wimonwan Panyawong, a clinical psychologist who traveled from Bangkok northeast to Nakhon Ratchasima, a city of 150,000 people about 250 kilometers (150 miles) away.
The hospital's lone forensic pathologist was joined by two others from out of town, but officials said it could be days before autopsies were complete and the bodies could be handed to families.
Kanokphon Watchawan, 28, came from Bangkok to retrieve the body of her brother, Wanchai, who was killed while working at a store on the mall's second story. Kanokphon  said hospital authorities told her to come back for him on Tuesday.
Officials said the assailant was angry over a financial dispute, first killing his commanding officer and the officer's mother-in-law and then seizing several assault weapons and ammunition from his army camp. He opened fire and wounded at least three soldiers before stealing an army vehicle to flee, shooting as he drove to the mall where shoppers ran in terror.
A funeral was held Sunday for a 13-year-old middle school student who was riding his motorbike when Jakrapanth fatally shot him en route to the mall.
Gun violence is not unheard of in Thailand, and the shooting in Nakhon Ratchasima comes just a month after another high-profile mall shooting in the central Thai city of Lopburi. In that case, a masked gunman carrying a handgun with a silencer killed three people, including a 2-year-old boy, and wounded four others as he robbed a jewelry store.
By Sunday evening, survivors were streaming back to the site of the rampage, Terminal 21 Korat, a gleaming airport-themed shopping mall, to retrieve vehicles abandoned during the police evacuation. The ground floor was spotless, with lights on, shops left open and a Haagen-Dazs ice cream kiosk freezer humming.
Palawan Ployudee, 50, whose gift shop on the mall's third floor sells her hand-painted clothes, bags and other decor, first hid other shop owners and customers in the back of her store. When they realized they were exposed, they ran to a security guard office and later fled to safety down an internal fire escape.
"The security guard instructed us to take off our shoes so we won't make any noise and notify the culprit," she said.
Elsewhere in the city, under a full moon, about 1,000 people gathered around the city's most important monument, a statue of Thao Suranari, who is credited with saving her people from an invading Lao king in the early 19th century.
People chanted prayers along with a slate of Buddhist priests leading funeral rites, holding candles in one hand and with the other, pointing to the sky, a gesture Buddhists believe directs souls to heaven.