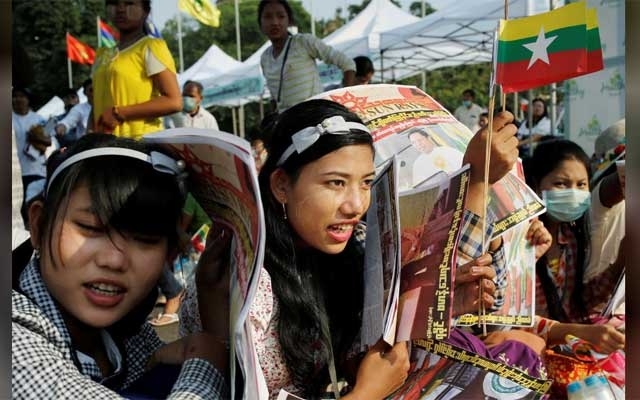 Hundreds of Myanmar nationalists rallied in the country's commercial capital on Sunday in a show of support for the military, amid tensions between the civilian government and the army ahead of elections expected later this year.
Around a thousand protesters marched from Yangon's famed Shwedagon pagoda to City Hall downtown to accuse the administration of Aung San Suu Kyi of allegedly failing to protect the country's Buddhist majority and for proposing constitutional amendments that would reduce the power of the military.
The proposed reforms have led to tensions between Suu Kyi’s National League for Democracy (NLD) and military lawmakers, who hold a veto over amendments.
Speaking at the rally, nationalist activist Win Ko Ko Latt criticised those planning to push through the reforms, comparing them to the deadly coronavirus outbreak in China.
"We can see how deadly the Wuhan virus is," he said, referring to the Chinese city where the outbreak was believed to have originated.
"I declare from here that those people who are trying to change (the constitution) are more frightening than the Wuhan virus."
Government spokesman Zaw Htay and NLD spokesman Myo Nyunt did not respond to calls from Reuters seeking comment.
Other speakers at the rally protested against remarks made by Myanmar's religious minister last month in which he allegedly blamed the military-controlled Home Affairs ministry for the government's failure to arrest several nationalist figures for sedition and inciting violence.
The figures include nationalist monk Wirathu, who is known for his harsh rhetoric against Myanmar's Rohingya Muslim minority.
Police issued an arrest warrant for Wirathu last year after he criticised the civilian government and made fiery speeches targeting Suu Kyi.
Protesters were seen carrying banners saying "No Rohingya" during Sunday's rally, the first held in support of the military since the United Nations' highest court ordered Myanmar to take measures to protect the minority group last month.
More than 730,000 Rohingya Muslims were forced to flee northern Rakhine state in 2017 after a military crackdown that the United Nations has said was executed with genocidal intent.
The army has denied any wrongdoing, describing the crackdown as a legitimate counter-insurgency operation in response to attacks on security forces by Rohingya militants.