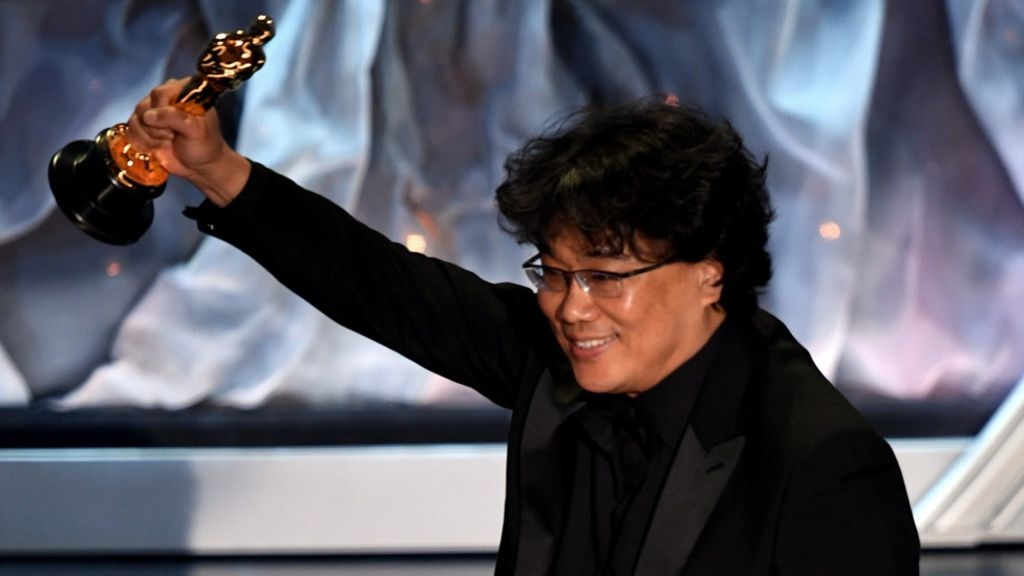 Bong Joon-ho won best director and best original screenplay as well as best picture
South Korean film Parasite has been named best picture at this year's Oscars, becoming the first non-English language film to take the top prize.
Renee Zellweger won best actress for playing Judy Garland in Judy. Joaquin Phoenix won best actor for Joker.
Brad Pitt and Laura Dern won the supporting acting awards for their roles in Once Upon A Time in Hollywood and Marriage Story respectively.
Parasite won four awards in total, while Sir Sam Mendes's 1917 took three.
The World War One epic had been the favourite to win best picture, but its awards all came in the technical categories.
Parasite's historic night
Parasite's Bong Joon-ho beat Sir Sam to the prize for best director, and also took the best original screenplay award.
The film is a vicious social satire about two families from very different classes - one who live in poverty in a semi-basement, and another rich family residing in a large home.
It has now managed what no other subtitled film has done in the 92-year history of the Academy Awards and won best picture.
Producer Kwak Sin-ae, who collected the trophy, said: "I'm speechless. We never imagined this to happen. I feel like a very opportune moment in history is happening right now."
The biggest winners
Brad Pitt gets political
The star won the first acting Oscar of his career - picking up the best supporting actor trophy for his role in Quentin Tarantino's film.
He was the first winner of the night, and immediately used his speech to attack the way the impeachment proceedings against US President Donald Trump were handled.
He referred to the fact that Republican senators voted against allowing witnesses including former National Security Adviser John Bolton to give evidence.
"They told me I only have 45 seconds up here, which is 45 seconds more than the Senate gave John Bolton this week," he said. "I'm thinking maybe Quentin does a movie about it and in the end the adults do the right thing."
The 56-year-old moved from the political to the personal, paying tribute to co-star Leonardo DiCaprio and remarking that the nomination had made him reflect on his journey to Hollywood superstardom.
"I'm a bit gobsmacked," he said, getting emotional. "I'm not one to look back, but this has made me do so."
Joaquin Phoenix speaks up against 'injustice'
Phoenix, who won best actor for his remarkable performance in the origin story about Batman's nemesis, also used the podium to send a heartfelt message about the state of the world, saying actors have the power to give a "voice for the voiceless".
He managed to cover topics from animal rights and the environment to racism and gender inequality.
"I've been thinking a lot about some of the distressing issues that we are facing collectively, and at times we are made to feel that we are championing different causes," he said.
"But I see commonality. For me, whether we're talking about gender inequality, or racism, or queer rights, or indigenous rights, or animal rights, we're talking about the fight against injustice."
He also quoted a lyric written by his late brother River: "Run to the rescue and love and peace will follow."
Laura Dern's 'best birthday present ever'
A day before her 53rd birthday, Laura Dern won best supporting actress for playing a divorce lawyer in Marriage Story.
She comes from an illustrious acting family, but in winning managed something her parents have not. Mother Diane Ladd has been nominated for three Academy Awards, and dad Bruce Dern has two unsuccessful nominations.
"Some say never meet your heroes," their daughter told the audience. "But I say if you're really blessed, you get them as your parents."
Meanwhile, Zellweger used her speech to pay tribute to Garland, who was nominated for two Oscars in the 1950s and 60s.
"Judy Garland did not receive this honour in her time," the actress said. "I am certain that this moment is an extension of the celebration of her legacy."
The British winners
Other notable winners
No host (but two hosts)
For the second year, the ceremony had no host, and was again better for it.
It all started with an incendiary performance by singer and Moonlight actress Janelle Monae. "We are celebrating all the women who directed phenomenal films," she said. "I'm proud to be here as a black queer woman."
Then Steve Martin and Chris Rock appeared to deliver the traditional opening monologue as a double act. "We both have hosted the Oscars before. And this is such an incredible demotion," Martin quipped.
He remarked: "Think how much the Oscars have changed in the past 92 years. Back in 1929 there were no black acting nominees." Rock added: "And now in 2020 we've got one."
They then gave way to a string of other celebrities to introduce each award.