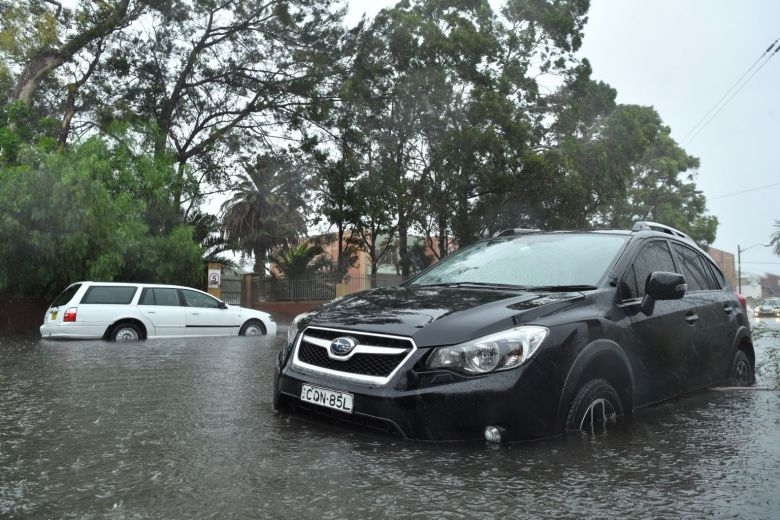 The Australian city of Sydney has been hit by its heaviest rain in 30 years, bringing flooding and travel chaos and forcing thousands from their homes.
The state weather agency said 391.6mm of rain had fallen in the past four days, and warned of potentially life-threatening flash floods.
About 100,000 homes have also been left without power.
But the rains have put out two of the biggest bushfires which have torn through New South Wales in past months.
The Currowan fire had burned for 74 days around the town of Shoalhaven, destroying nearly 500,000 hectares and 312 homes.
The Gospers Mountain blaze, north-west of Sydney, had been considered "too big to put out" and had been burning since October.
The Bureau of Meteorology (BoM) has warned that fire-hit areas can be particularly prone to flooding, and that fast-moving waters can carry large amounts of debris.
There are still 31 fires burning in New South Wales, but none are considered an immediate danger at present.
The massive rainfall has also replenished water supplies in the region, which has been battling years of drought.
The Warragamba Dam, which supplies most of Sydney's water, is heading towards being 70% full, says WaterNSW.
At the end of last week it was at only 42% after one of the driest years on record.
A severe weather warning is now in place for the entire coast of NSW, Australia's most populous state.
In Sydney alone, at least 200 people were rescued by emergency services over the weekend.
"Everywhere has been hit, it's hard to pinpoint where it's worst," said Matt Kirby, spokesman for the State Emergency Services (SES).
Several people have been injured, including four who were inside a car which was crushed by a falling tree in the city centre on Sunday afternoon.
On Monday morning, emergency services were searching for one man believed to have been swept off a bridge in his car.
Rail and ferry services in Sydney were also disrupted on Monday morning, with several platforms at one of Sydney's main stations, Central, left underwater. Dozens of schools have been closed.
The state emergency minister David Elliott has urged Sydneysiders to help rescue services by taking warnings seriously, staying away from flooding and keeping off the roads if possible.
Emergency services had advised people to stay home from work on Monday to avoid the disruption.
Thousands of people in low-lying areas of the city have been told to leave or get ready to leave their homes.
The Northern Beaches area has already seen significant damage, with several metres of beach being washed away in places.
On Sunday night, people living around the Narrabeen Lagoon, a low-lying area in northern Sydney, were told to evacuate before roads became impassable.
Waves more than 5m high have lashed the coast in areas like Collaroy, just south of Narrabeen, stripping away front gardens facing the sea.
While it had stopped raining in central Sydney on Monday, more rain is forecast for the week.
Government agencies have warned that high tides forecast for the coming days - known as king tides - could further worsen the flooding.