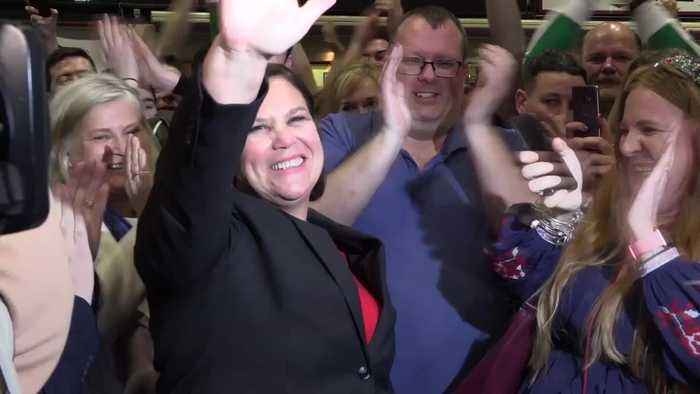 Sinn Féin president Mary Lou McDonald has described the Irish general election as "something of a revolution in the ballot box".
Counting is continuing and the first results have come in, with Sinn Féin winning the most first preference votes.
With all first preferences counted, it has 24.5% compared to 22.2% for Fianna Fáil and 20.9% for Fine Gael.
No one party will win enough seats for an outright majority.
Polling in the election closed at 22:00 local time on Saturday.
Ballot boxes from across the 39 constituencies were opened at 09:00 on Sunday.
Many counts have finished for the night and will resume at 10:00 on Monday, but some are continuing.
Sinn Féin ran 42 candidates across the 39 multi-seat constituencies, about half that of both Fine Gael and Fianna Fáil, which will have a knock-on effect on the number of seats it can secure in the 160-seat Dáil (Irish parliament) where 80 seats are needed for a majority.
What kind of government could be formed?
Once the final number of seats for each party is known, leaders will try to form a coalition government in order to avoid another general election.
Before the election both Fine Gael and Fianna Fáil said they would not enter coalition with Sinn Féin.
Arriving at the RDS count centre in Dublin on Sunday afternoon, Sinn Féin leader Mary Lou McDonald said she was exploring options to see if it would be possible to form a government without either Fine Gael or Fianna Fáil.
On Sunday evening taoiseach (Irish PM) and Fine Gael leader Leo Varadkar said it would be "challenging" to form a government.
He said his party has consistently ruled out forming a coalition with Sinn Féin "in large part because of their policies in relation to crime, tax and the way the economy and society should be run and also our deep concerns about their democratic structures.
"We don't believe a coalition between Sinn Féin and Fine Gael is a viable option," he said.
He said a "forced marriage would not result in a good government."
Fianna Fáil leader Micheál Martin did not rule out working with Sinn Féin, but said "significant incompatibilities" still existed.
He said reports suggested that his party "would be the largest". He added that he was a "democrat" and respected the vote of the people.
What could Sinn Féin's surge mean for the overall result?
Following the last election in 2016 Sinn Féin had 23 seats in the Dáil (Irish parliament).
There are 160 seats up for election this time around, and Sinn Féin is set to dramatically increase how many it holds after it won the most first preference votes.
Ms McDonald said this election was about "change".
She topped the poll in her four-seat Dublin Central constituency.
"The frustration people have felt for a long time with the two-party system, whereby Fine Gael and Fianna Fáil handed the baton of power between each other - that's now over," she said.
"We now have a very substantial mandate."
She said she was exploring options to see to see if it was possible to form a government without Fine Gael and Fianna Fáil.