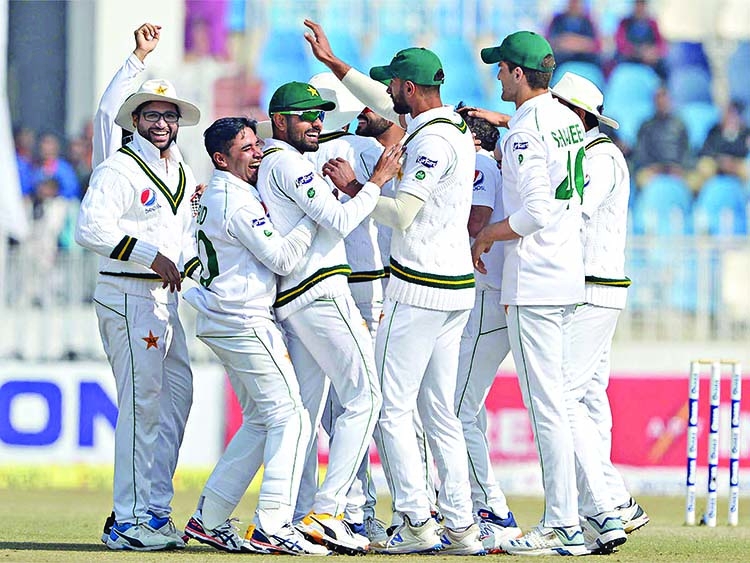 Pakistan players celebrate after the dismissal of Rubel Hossain in Rawalpindi on Monday. -AFP
Bangladesh continued their dismal run in the longer version format, tasting a yet another innings and 44-run defeat to Pakistan inside three and half days in the first Test at Rawalpindi on Monday.
This was Bangladesh's sixth defeats in Test cricket in a row but the startling revelation was that amongst those six, five defeats came at innings margin, proving the country's sheer vulnerability in this format. To make the matter worse, it is the Tigers' seventh innings loss in eight away Tests.
The latest defeat was Bangladesh's 89th in 118 Tests, amongst which 43 was by innings margin. Bangladesh's defeat was almost ensured on the third day but it was to see whether they could avoid the innings defeat.
At a time when their Tigers created a history, beating India in a nerve-wrecking final to lift the ICC Under-19 Cricket World Cup, the fact was expected to act as an inspiration for the senior team. But that was not to be.
Resuming the day on 126-6, still trailing by 86 runs to avoid the innings defeat, Bangladesh could add just 42 runs to their overnight total and was subsequently dismissed for 168 in 62.2 overs. They could only survive 17.2 overs on the fourth day before crumbling to the innings defeat.
Skipper Mominul Haque was the highest scorer for the side with 41 while Liton Das made 29. Shaheen Shah Afridi made the breakthrough on day four, taking the scalpof Mominul before Yasir Shah cleaned up the tail to complete the dominating victory.
Yasir ended with 4-58. Bangladesh was bowled out for 233 in its first innings with Mohammad Mithun making the highest 63. Pakistan however rode on Babar Azam (143) and Shan Masood's (100) century to post 445 in reply, which proved to be enough to seal an innings victory.
Naseem Shah who on day three claimed a hat-trick and sparked Bangladesh's batting collapse with 4-26 was adjudged man of the match. He had a muscle pull however which prevent him from bowling at full throttle "I had an MRI, I had a muscle pull but the scan is clear.
I should be able to resume bowling in two days. Picking up a hat-trick in front of your home crowd is special. They added to the support and festivities. It was great fun. I only hope I will be able to live up to the expectation of fans and team-mates," Naseem said after the match.
The second Test is in Karachi from April 5-9, when Bangladesh would go to Pakistan for the third phase of tour. Ahead of that Test, Bangladesh will also play an ODI match.
SCORES IN BRIEF
Bangladesh 1st innings: 233 for 10 in 82.5 overs (Mithun 63, Shanto 44, Liton 33, Mominul 30; Shaheen 4-53, Abbas 2-19, Haris 2-11)
Pakistan only innings: 445 for 10 in 122.5 overs (Babar 143, Masood 100, Haris 75, Asad 65; Abu Jayed 3-86, Rubel 3-113, Taijul 2-139)
Bangladesh 2nd innings: 168 for 10 in 62.2 overs (Mominul 41, Tamim 34, Najmul 38, Liton 29; Naseem 4-26, Yasir 4-58)
Result: Pakistan won by an innings and 44 runs
Player of the match: Naseem Shah