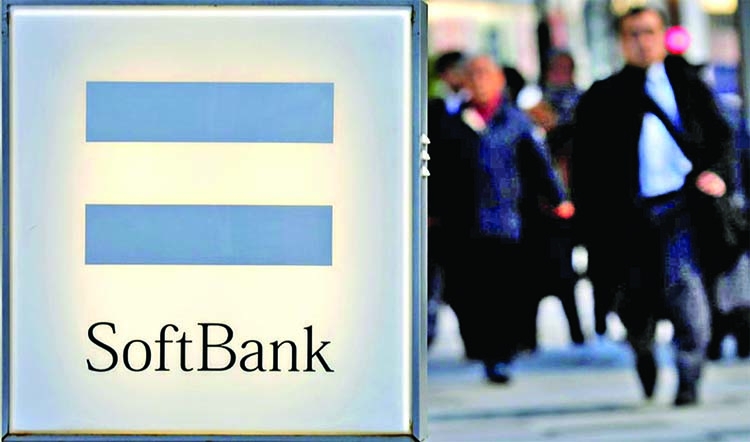 People walk behind the logo of SoftBank Corp in Tokyo. -Reuters
Japan's SoftBank Group (9984.T) is expected to post a slide in profits for the past quarter, deepening concern about its ability to secure funding for a second Vision Fund and giving activist fund Elliott Management more fodder for a shake-up.
Elliott, the New York-based fund founded by billionaire Paul Singer, has amassed a stake of almost $3 billion in SoftBank and is pushing for changes including $20 billion in stock buybacks, sources said last week. The emergence of Elliott, one of the world's most powerful activist investors, as a prominent SoftBank shareholder is likely to highlight the Japanese conglomerate's difficulties following its soured bet on office-sharing startup WeWork.
SoftBank, which reported its first quarterly loss in 14 years in July-September, has come under increasing pressure for its lack of transparency, especially around its $100 billion Vision Fund of largely unlisted start-ups. "I'm not sure investors will have confidence in the private valuations that drive the reported performance of the Vision Fund, particularly after the performance of WeWork and others," said Morningstar analyst Dan Baker.
The tech conglomerate, which reports on Wednesday, is expected to post a 20% fall in operating profit to 345 billion yen ($3.1 billion) in the October-December quarter, according to the average forecast of three analyst estimates compiled by Refinitiv. That would follow a quarterly operating loss of 704 billion yen when the firm was whiplashed by an $8.9 billion hit at the Vision Fund as the value of WeWork and other bets like Uber (UBER.N) plunged.
The loss prompted founder Masayoshi Son to acknowledge his "investment judgment was poor in many ways". A second quarter of dismal results would only reinforce doubts about the viability of a second, massive fund, given that it would be reliant on profits from the current Vision Fund for some of its funding.
Analysts have long highlighted the challenge of forecasting SoftBank's earnings, given the limited visibility on Vision Fund valuations. In the six months to September, the fund said it had gains on 25 companies and losses on another 25, but identified only a handful of names. What is clear, though, is that since the WeWork bailout.
, a slew of portfolio companies - from hotel-booking platform Oyo to cloud robotics firm CloudMinds - have cut jobs and come under pressure to show their business models are viable. That's a marked shift from Son's previous strategy of prioritizing growth over profitability.
SoftBank Corp, the telecommunications firm that is two-thirds owned by SoftBank Group, and one of the parent's biggest listed assets, on Friday reported a 15% rise in quarterly profit. The Vision Fund has stakes in nearly 90 start-ups.
Only five were listed prior to the October-December quarter. During that period, three of those fell although ZhongAn Online P&C Insurance Co Ltd (6060.HK) rose almost 60%.Chip designer Arm, which will also provide an update on Wednesday, has turned money losing.
SoftBank's shares, which have been propped by positive sentiment toward China's Alibaba (BABA.N), have been boosted by the news of Elliott's stake and are up around 8% year to date.
---Reuters, Tokyo