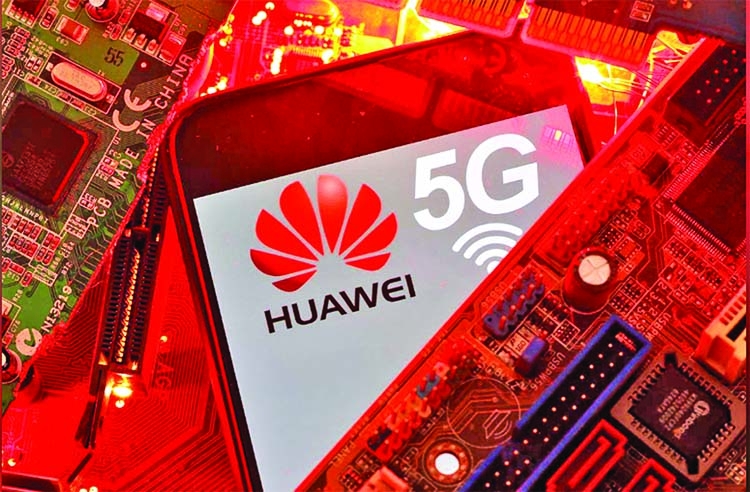 A smartphone with the Huawei and 5G network logo is seen on a PC motherboard in this illustration picture taken. -Reuters
The Chinese embassy in Paris on Sunday urged the French government not to discriminate against Huawei as it selects suppliers for its 5G mobile network, saying it feared the company would face more constraints than rivals.
China's Huawei, a global giant in telecoms network equipment, is the center of an international political storm as the United States seeks to convince countries to ban the company from their mobile networks. Washington says its technology could allow "back doors" for Chinese spying - an allegation denied by Huawei and Beijing.
France is in the early stages of rolling out its next-generation wireless technology, and the government's stance over Huawei's possible role still lacks clarity, according to some telecoms industry trade bodies. Some French media outlets have reported in recent months that the company could face restrictions in several cities.
The Chinese embassy said in a statement on its website that it was "shocked and worried" by such reports, adding that French President Emmanuel Macron and other officials had given repeated assurances that all companies would be treated fairly.
"If, due to security concerns, the French government truly does have to impose constraints on operators, it should establish transparent criteria around this and treat all companies equally," said the embassy. It added that security fears about Huawei were unfounded.
Huawei did not immediately respond to requests for comment, and the French economy ministry declined to comment. The embassy also said that China had used foreign companies such as Finland's Nokia (NOKIA.HE) and Sweden's Ericsson (ERICb.ST) to equip its own domestic networks. "We do not wish to see the development of European companies in China affected due to discrimination against Huawei and protectionism in France and other European countries," it said.
France's cybersecurity agency ANSSI, which is scrutinizing equipment from various suppliers, is due to issue its preliminary findings later this month. Some telecoms operators have already picked 5G equipment makers, with France's Orange opting for Nokia and Ericsson.
Britain has granted Huawei a limited role in its 5G roll-out, while the European Union has resisted pressure from Washington for an outright ban in its guidance to member states. The United States suggested in recent days it could consider taking a stake in Nokia and Ericsson to counter Huawei's dominance in 5G technology.
--Reuters, Paris