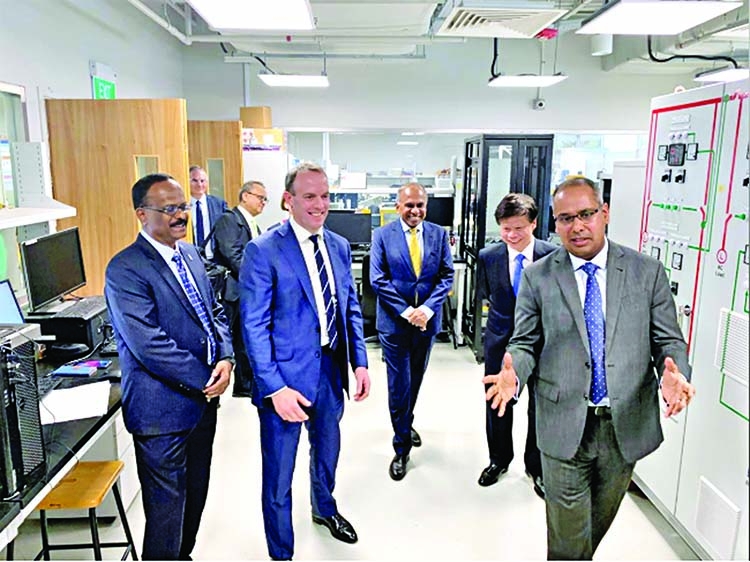 Britain's foreign secretary Dominic Raab visits a research laboratory which is a collaboration between UK firm Rolls-Royce, Nanyang Technological University Singapore and Singapore's National Research Foundation. -Reuters
Britain takes U.S. concerns about its use of Huawei equipment seriously but is confident a trade deal with the United States will be among its first after leaving the European Union, its foreign secretary said on Monday.
U.S. officials have hinted future trade talks could be affected by Britain's decision last month to grant Huawei a limited role in its 5G mobile network, frustrating a global bid by the United States to exclude the firm from the West's next-generation communications systems. "We listened and take the concerns of our American friends very seriously," Dominic Raab said in response to a question about the issue.
"We are reasonably confident that we can do a free trade agreement (with America) in that first wave of post-Brexit trade deals," Raab added, during a visit to Singapore. "We have had a good conversation about Huawei and the one thing we all recognize is there has been market failure in terms of high-trust vendors being able to provide telecoms infrastructure."
Last month, Britain said it would cap at 35% the involvement of "high-risk vendors", such as Huawei, in the non-sensitive parts of its 5G mobile network. Excluding Huawei altogether would have delayed 5G and cost consumers more, it added.
Yet some senior members of Prime Minister Boris Johnson's Conservatives have demanded that Huawei must not have a role, a position described on Sunday as a "kind of witch-hunt" by China's ambassador to Britain. Britain is in talks with America, Australia, Canada, and others on future technological innovations that could challenge Huawei's dominance in the field, Raab said. "
For 5G, the sooner we can build up our pool of high-trust vendors the less reliant we will be on high-risk vendors," he added. Raab, who is visiting Asia to seek free trade deals after Brexit, said he also expected Singapore to be in the first wave of post-Brexit trade deals. He will travel to Malaysia on Tuesday, wrapping up a tour that included Australia and Japan.
---Reuters, Singapore