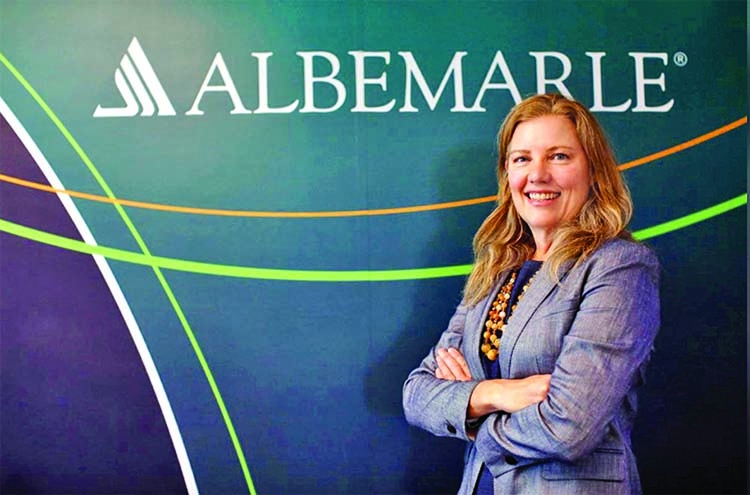 Ellen Lenny-Pessagno, Country Manager of Albemarle Corporation, poses for a photo before an interview with Reuters in Santiago, Chile. -Reuters
With residents and courts ringing the alarm about depleted water supplies in Chile's Atacama salt flat, the world's top lithium miner Albemarle (ALB.N) quietly filed a proposal in December for a network to monitor flows beneath the parched desert floor.
The previously unreported move is an indication of how important it has become for miners to prove their supplies of the so-called "white gold" battery metal are sustainable as they court automakers preparing for the coming electric vehicle revolution.
Car companies have ratcheted up scrutiny in the Atacama, by far the biggest source of supply in South America's so-called "lithium triangle," where one lithium producer is locked in a court battle over pumping of brine and a copper miner has opted for pricey desalination over drawing water from local aquifers.
"What we're seeing is a scrutiny of how lithium is being produced, and particularly, in the Salar de Atacama," Ellen Lenny-Pessagno, Albemarle's Chile manager, told Reuters in an interview in capital city Santiago. "They want data."
She said a team from Germany's biggest car maker Volkswagen (VOWG_p.DE) - which expects to produce 1.5 million electric autos by 2025 - visited the Atacama last month to scope out the social and environmental impact of mining operations there.A source at Volkswagen, who asked not to be named, confirmed a recent trip had been made to Chile to check on local conditions. The carmaker declined to comment.
That came after a Chilean judge sided with local indigenous communities and knocked back an environmental remediation plan from top rival SQM (SQMA.SN) in December, warning of "fragility" in the Atacama's ecosystem.
"Developing a greener world can't come at the cost of an entire territory... and culture," said Juan Carlos Cayo, an attorney for communities in Atacama, following that decision. The battle for water in Chile's salt flats has intensified.
Residents and environmental groups worry that mining of lithium and copper is damaging a regional ecosystem home to an ancient indigenous culture and turquoise lagoons inhabited with rare pink Chilean flamingos. For Albemarle, the world's largest producer of lithium, resolving the water issue is a "business decision", Lenny-Pessagno said, adding the firm was open to working with other miners on the matter including rival SQM.
"Whatever happens in the salar will ultimately impact our business," she said, confirming the plan for a two-decade monitoring network to get a fuller picture of the issue. A government study intended to provide similar information has been repeatedly delayed since 2018, leaving a void. A spokeswoman for Chile development agency Corfo, which is managing that process, said the report was nearing completion.
Salt-rich brine holds in suspension the lithium that automakers covet. Miners use freshwater beneath the flats for industrial processes. Both water and brine are scarce commodities in the world´s driest desert.

Last week miner BHP (BHP.AX) scrapped plans to continue pumping water from the Atacama basin to feed its massive Escondida copper mine, the world's largest. It said it would use desalinated water instead. Albemarle, too, shelved longer-term plans to expand its operations at Atacama following questions from regulators in 2018 about technologies that would allow the company to produce more lithium without pumping more brine.
Rival SQM's operations are also in limbo after a plan to lessen its environmental impact was thrown out by judges who said a green light from regulators had relied on junk science and warned about a "high level of scientific uncertainty" about the behavior of the Atacama's water table. SQM has criticized the court's ruling and appealed to the Supreme Court. A decision is pending.
Lenny-Pessagno said Albemarle's near-term focus would be developing technologies to extract more lithium from the brine it already had permits for. She said the company had "no intention of asking to increase our pumping rate."
She confirmed plans to open the La Negra III and IV lithium processing plants in Chile by next year, boosting the firm's production capacity in the country to 85,000 tonnes. Last May, Albemarle announced a project to boost its Atacama lithium production by 30% without extracting more brine.
When asked if that technology, or others, might help revive plans to produce over 85,000 tonnes, she said both the market and technology would dictate timing. "These technological improvements take time, it's still a work in progress. We want to be rational in terms of what our goals are," she said.
---Reuters, Santiago