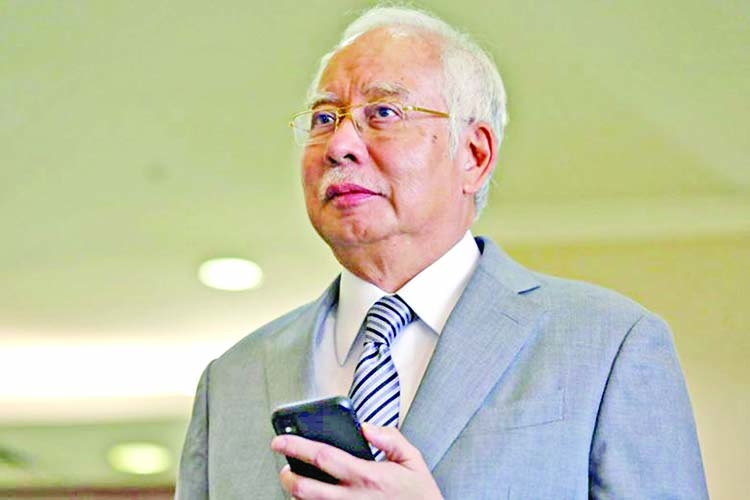 Former Malaysian Prime Minister Najib Razak
A former Malaysian ambassador to Saudi Arabia told the High Court that he was informed by Najib Razak about the purpose of the Saudi donation to Malaysia and not by the palace.
Datuk Prof Syed Omar Al-Saggaf, 76, said he was told by the former prime minister that the donation would be used for election purposes after the latter had a private meeting with the Saudi King in 2010, reports The Straits Times.
The fourth witness in the defence trial of Najib, who is accused of misappropriating of RM42 million (S$14 million) in SRC Internationa's funds, was an ambassador to Saudi Arabia between 2008 and 2013 and a permanent Malaysian representative to the Organisation of Islamic Cooperation (OIC). He was testifying in the cross-examination by lead prosecutor  V. Sithambaram in Kuala Lumpur on Monday.

(Feb 10). Datuk Sithambaram: You said the money was for assisting the (previous) government in winning the 14th General Election so that the same government stays in power. Is this correct?
Prof Syed Omar: I only know that King Abdullah (Abdulaziz Al-Saud) expressed his support. I don't know what happened after that. Najib told me that the funds were to be used for the election, not the palace.Mr Sithambaram: So you did not hear King Abdullah saying that the money was for the election?
Keep up with the latest in the region with the ST Asian Insider newsletter, delivered to your inbox every Sithambaram: You personally did not hear what they said to each other (during the meeting) and you do not have personal knowledge that it was for the election? Prof Syed Omar: No. Sithambaram: So whether this was true or not, you don't know.
Prof Syed Omar: I don't know.To other questions, the witness also said he had no clue about the amount that was donated to Malaysia and had never heard of a donation being returned.
During re-examination by Najib's lead counsel, Tan Sri Muhammad Shafee Abdullah, Prof Syed Omar agreed with the suggestion that there were other people nearby when King Abdullah made known his intention to give a donation during the formal meeting in 2010.Mr Shafee: There were Najib, Datuk Seri Jamil Khir Baharom, the King and an interpreter. You didn't hear them.
Prof Syed Omar: Yes.
The witness said the Saudi King supported Malaysia as the King felt Malaysia had stability, whereas even the kingdom faced disruption due to different mazhab (Islamic school of thoughts).
"I heard from the King himself that he supports Malaysia, " he added.The witness was then released after completing his testimony.
Najib is facing seven charges - three for criminal breach of trust, one for abuse of power and three for money laundering involving SRC International funds.Mr Jamil Khir is expected to take the stand as a witness before Justice Mohd Nazlan Mohd Ghazali on Tuesday.