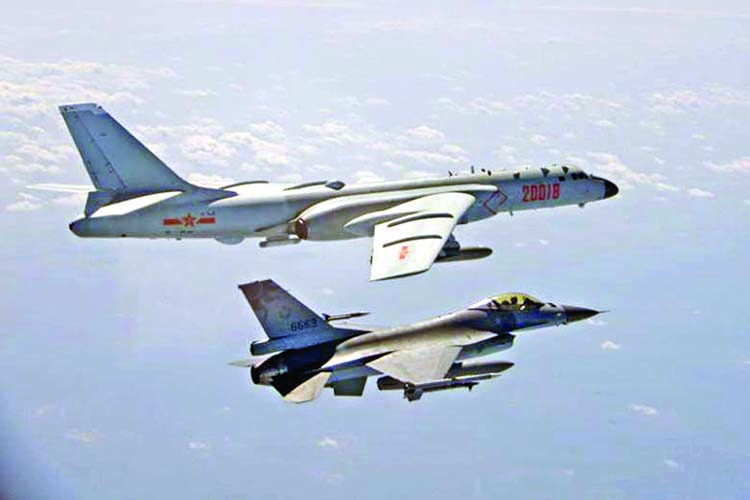 An H-6 bomber of the People's Liberation Army Air Force flies near a Taiwan F-16 on Monday. -Reuters
Taiwan's air force scrambled for a second day in a row on Monday (Feb 10) to intercept Chinese jets that approached the island claimed by Beijing as its own, as tensions between the two took on a potentially dangerous military dimension.
Taiwan's Defence Ministry said Chinese jets, accompanying H-6 bombers, briefly crossed an unofficial mid-line in the Taiwan Strait that separates the two, prompting its air force to rush to intercept and give verbal warnings to leave.The Chinese aircraft then withdrew to the western side of the line, the ministry added, without identifying the jets.
The H-6s were on a training mission in the Pacific having passed through the Bashi Channel that separates Taiwan from the Philippines, the ministry added and shared a picture of a Taiwan F-16 accompanying one of the H-6 bombers.
China has been flying what it calls "island encirclement" drills on-off since 2016 when Taiwan President Tsai Ing-wen first took office. Beijing believes Tsai, who won re-election last month, wishes to push the island's formal independence. Tsai says Taiwan is an independent country called the Republic of China, its official name.
On Sunday too, Chinese jets, including J-11 fighters, flew into the Bashi Channel then out into the Pacific before heading back to base via the Miyako Strait, located between Japan's islands of Miyako and Okinawa, to the northeast of Taiwan.Get exclusive insights of Asia from our network of correspondents According to Taiwan's official Central News Agency, the F-16s scrambled on Sunday carried live missiles.
There was no immediate comment from China on Monday's incident. This is only the second time since 2016 that Taiwan has said that Chinese jets had crossed the strait's median line. Their military aircraft tend to keep to their own sides. China's Taiwan Affairs Office, though, urged Taiwan's ruling Democratic Progressive Party (DPP) "not to play with fire".

The DPP have been "adopting a stance that increases cross-strait confrontation, intensifying new moves for Taiwan-US collusion, using the opportunity to seek independence and openly carrying out dangerous provocations", it added.
China's Eastern Theatre Command described Sunday's fly-by of military's combat ready patrol as a "completely legitimate and necessary action aimed at the current situation in the Taiwan Strait and safeguarding national sovereignty".
The latest fly-bys came as Taiwan's vice-president elect, William Lai, was returning from a visit to Washington, where he attended the high-profile National Prayer Breakfast, at which US President Donald Trump spoke.
China denounced Lai's trip. Washington is Taipei's most important backer and arms supplier, despite the absence of official diplomatic ties. China says Taiwan is the most sensitive issue in its relations with the United States.
Relations between the Taipei and Beijing have further soured recently over the coronavirus outbreak, with Taiwan accusing China of preventing the island from accessing full information from the World Health Organization or attending its meetings.China should focus on controlling the spread of the virus, rather than threatening Taiwan, Tsai said on Monday.
Taiwan's China-policy making Mainland Affairs Council said the island's 23 million people would not bow down to threats. "In recent years, Communist aircraft and warships have frequented the vicinity of the Taiwan Strait and attempted to use arms to force unification," it said."Various provocative acts have seriously damaged the status quo of the Taiwan Strait and have increased regional tensions."
---Reuters, Taipei