60 more confirmed with virus on cruise ship in Japan 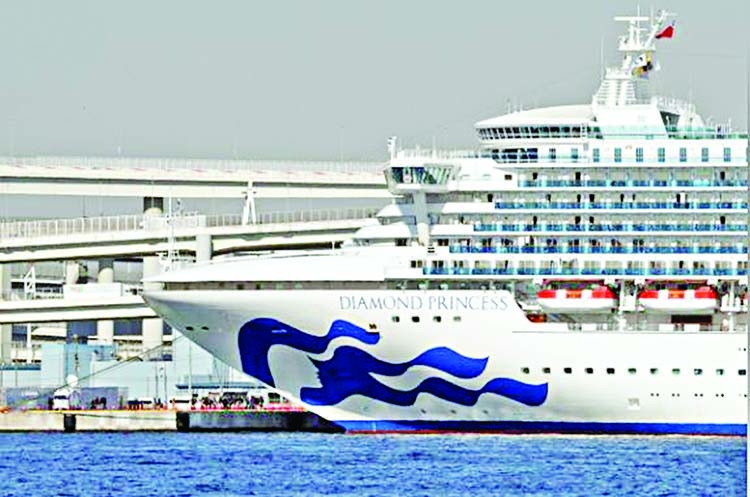 The cruise ship Diamond Princess, where dozens of passengers were tested positive for coronavirus, is seen at Daikoku Pier Cruise Terminal in Yokohama, south of Tokyo, Japan on Monday. -Reuters
Testing aboard the Diamond Princess cruise ship in Japan has revealed 60 more confirmed cases of coronavirus, media said on Monday, as quarantined passengers took to social media to warn of depression setting in over their confinement.
Monday's figure takes to 130 the number of infections on the ship docked in Yokohama, domestic broadcasters TBS and NHK said, citing Japanese health ministry sources.
The health ministry's communication office had no information on the report when contacted by Reuters. The Diamond Princess was placed in quarantine for two weeks upon arriving in Yokohama, south of Tokyo, on Feb. 3, after a man who disembarked in Hong Kong was diagnosed with the virus.
About 3,700 people are aboard the ship, which usually has a crew of 1,100 and a passenger capacity of 2,670. Passengers have been allowed on decks in shifts to get fresh air and encouraged to regularly take their temperature. "
Lots of the passengers now are getting a bit of cabin fever," British passenger David Able said in a video posted on Facebook. "Depression is starting to set in." Another said he hoped assurances about the effectiveness of quarantine and ventilation on board would prove true.
"I will get nervous if we pass 200," said the 43-year-old Hong Kong resident quarantined on the boat with his wife, child and several others of his family. "Hoping best for those taken to hospital.
At least two report back to us on Facebook that they are symptom free," said the man, who declined to be identified. A passenger with the Twitter handle daxa_tw posted an audio clip of the captain announcing the discovery of 66 new cases.
Japan's health ministry is separating infection counts on the ship and evacuee flights from China from Japan's official tally. Domestic cases stand at 21. The disease has killed 908 people, chiefly in mainland China, and infected more than 40,000.
---Reuters, Tokyo