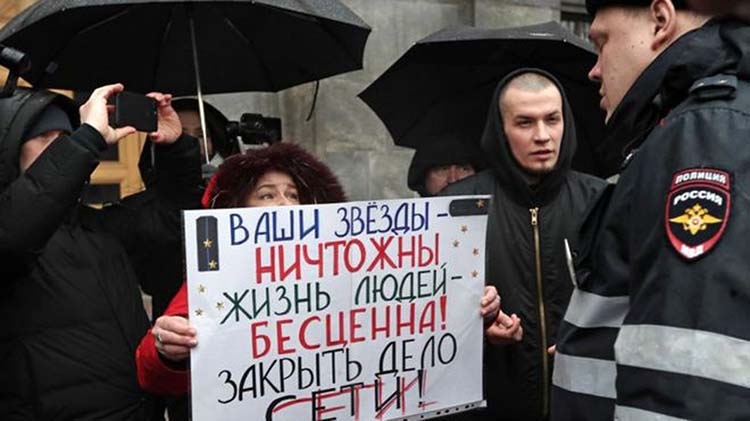 Protesters have gathered outside FSB offices in recent weeks in defense of the men. -Getty Images
A court in central Russia has jailed members of an anti-fascist activist group for up to 18 years on terrorism charges, the Mediazona news website reported Monday.Seven members of the group Set - Russian for "Network" - were detained in the city of Penza along with four other members in St. Petersburg in 2017.
Investigators claim that they planned attacks during the 2018 presidential election and the football World Cup, while rights groups say that the case is "fabricated" and based on testimonies obtained through torture.A court in Penza has sentenced the seven members of Set to prison terms between six and 18 years, according to Mediazona.
The activists' supporters chanted "freedom to political prisoners" in the courtroom after the judge read out the guilty verdict, according to video shared by the independent Novaya Gazeta newspaper.
The defendants have the right to appeal the sentences; a judge was cited as saying. The jailed activists have accused security officers of torturing them into incriminating themselves. Russia's Federal Security Service (FSB) responded to the allegations by saying it was a "professional necessity."
Asked about the case on a conference call, the Kremlin said President Vladimir Putin was aware of the case, but that it would not be appropriate for him to intervene in it.
"The president has repeatedly looked into this situation and repeatedly ordered everything to be checked thoroughly to make sure everything is in line with the law," Kremlin spokesman Dmitry Peskov told reporters.
Opposition leader Alexei Navalny described the sentences as "horrific" in a post on Twitter. "These very young people's testimonies about an imaginary terrorist organization were beaten out using torture.
Any minister in the Russian government is 10 times more of a criminal and a threat to society than these guys," he said. The first member of the group to be sentenced, Igor Shishkin, was handed a three-and-a-half-year sentence in January 2019 after making a deal with investigators.
It was not immediately clear when the verdict will be read out in the St. Petersburg Set case. Authorities blacklisted Set as a terrorist organization in 2019, placing it alongside the Taliban, al-Qaeda and the banned Islamic State terrorist organization.
---BBC