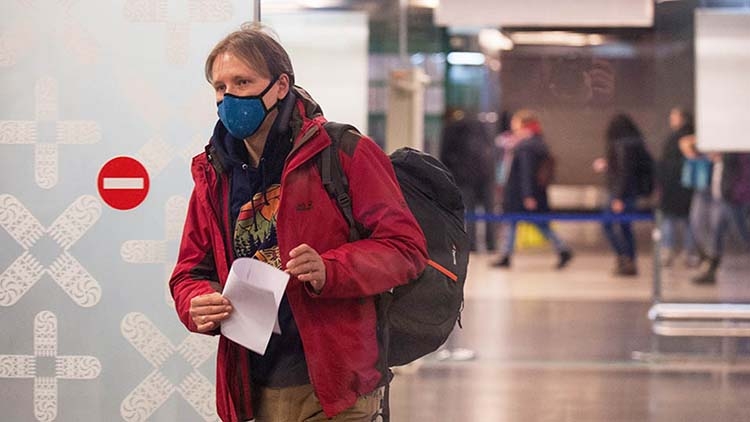 While the UN's World Health Organization has declared the outbreak a global emergency, there are no confirmed cases of coronavirus in Russia yet. -File Photo
Russia has reported its first two cases of coronavirus and said the infected people were Chinese citizens who had been isolated.As the new coronavirus that has killed more than 400 people in China continues to spread around the world, Russia has stepped up measures to tackle the health risk, including closing most entry points along its 4,200-kilometer border and suspending e-visas and work visas for Chinese nationals.
China's Hainan Airlines and China Southern Airlines plan to lay off more than 100 Russian pilots amid wider cuts to foreign staff as the coronavirus outbreak has halted travel into and out of China, the state-run TASS news agency reported. "
All foreign pilots will be sent to temporary downtime without salary until the company notifies the pilots about the possibility of returning to work if the situation improves," TASS cited a China Southern Airlines message to pilots as saying.
Authorities in the Chelyabinsk region 1,500 kilometers east of Moscow have walked back plans to set up a quarantine center after local residents formed a human shield to prevent entry to Chinese nationals.
Prisoners in the Kursk region have begun making face masks to be used in correctional facilities after a spike in demand, Interfax cited the region's penitentiary service as saying Friday. "The masks made at penitentiary production sites are in no way inferior to those from the pharmacy," the regional penitentiary service was quoted as saying.
The Kremlin has started checking the body temperatures of individuals attending events with President Vladimir Putin as a "precautionary measure," spokesman Dmitry Peskov said Thursday.
President Vladimir Putin on Wednesday proposed stripping pharmacies of their licenses if they raise prices for anti-virus masks amid the coronavirus outbreak.Russia said it will take between eight and 10 months to develop a vaccine against coronavirus, Interfax cited Health Minister Mikhail Murashko as saying.
Russia has set up a quarantine area in Siberia's Tyumen region for Russians being evacuated from the epicenter of the coronavirus outbreak. All evacuated citizens will be held in quarantine for 14 days.

Russia will from Tuesday temporarily restrict the entry of foreigners arriving from China, Deputy Prime Minister Tatiana Golikova said. She said the restrictions would not, however, apply to Moscow's Sheremetyevo Airport, the capital's main international airport.Russia may deport foreign citizens found to be infected with coronavirus, Prime Minister Mikhail Mishustin said Monday.
Russia has postponed the Russian Investment Forum in the Black Sea city of Sochi due to coronavirus concerns. The forum, which is attended by a string of high-ranking officials and foreign investors, had been set to take place Feb. 12-14.
At least two regions - the Ulyanovsk region and the nearby Samara region on the Volga river some 900 kilometers (560 miles) east of Moscow - temporarily closed schools amid increased cases of flu which officials said were not linked to coronavirus.Moscow suspended visa-free travel for tourists to and from China and temporarily stopped accepting and issuing documents for work visas to Chinese nationals.
State-run Russian Railways said it would halt passenger trains to China, including the Beijing-Moscow route, until further notice.Russia's second-largest food retailer Magnit said it is suspending fruit and vegetable imports from China due to the spread of the coronavirus and logistical complications.
Energy Minister Alexander Novak said Friday that OPEC+ countries may react if there are significant consequences for the oil market due to the outbreak. He said that the oil-producing countries have discussed bringing forward the March OPEC+ meeting, adding that they need several more days to monitor the situation.
In addition to observing personal hygiene, the consumer protection watchdog advised against loose hair, as well as kissing and hugging in public.Apple and Chinese phone manufacturers stopped deliveries into Russia for two weeks, the Kommersant business daily reported.
In St. Petersburg, the celebrated Mariinsky Theatre postponed a Feb. 11 performance by a Chinese national opera and dance troupe until a "more favorable time when listeners can enjoy the music without worrying unnecessarily."Russian universities and employers were advised to extend time off for their Chinese students and workers, either until further notice or March.
Russian state lender VTB said it has temporarily suspended all business trips by its employees to China and several other Asian countries.Gazprom said the virus is not affecting Russian gas supplies to China via the newly built "Power of Siberia" pipeline.
Russia's tourism association expects China's ban on overseas tours to lead to an 80% drop-off in numbers in northern Russia's Murmansk region, The Barents Observer reported. The Association of Tour Operators of Russia (ATOR) expects Russian tour agencies to lose up to $100 million by the end of March due to the ban.
Russia's first McDonald's restaurant scrapped a plan to sell Big Mac burgers for 3 rubles ($0.04) to mark its 30th anniversary on Jan. 31. Authorities in Moscow have issued a citywide warning against mass public events due to fears of the coronavirus.