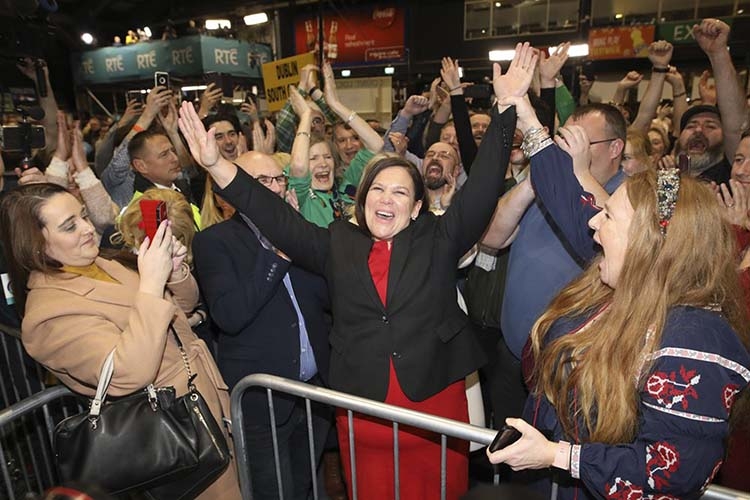 Sinn Fein leader Mary Lou McDonald celebrates with supporters after topping the poll in Dublin central at the RDS count centre in Dublin, Ireland, Sunday. -AP
Ireland's political parties were scrambling to adjust to a new reality Monday, after an earth-shaking election that saw the left-wing nationalist party Sinn Fein win the biggest share of votes.
Sinn Fein, the party historically linked to the Irish Republican Army and its violent struggle for a united Ireland, received 24.5% of the first-preference votes in Saturday's election. That bested Fianna Fail and Fine Gael, the two centrist parties that have governed Ireland since it won independence from Britain a century ago. Fianna Fail received 22.2% of the votes and Fine Gael, the party of incumbent Prime Minister Leo Varadkar, got 20.9%.
Sinn Fein's left-wing proposals for tackling Ireland's housing crisis and creaking healthcare system proved a powerful draw for young voters in a country that is still dealing with aftershocks of the 2008 global financial crisis, which hammered its debt-driven "Celtic Tiger" economy.
Vote counting was resuming Monday to fill all the seats in the 160-Dail, the lower house of Ireland's parliament. Ireland uses a proportional-representation system in which voters rank candidates from first to last, with the lower preferences of elected or defeated candidates redistributed among their rivals.
It's highly unlikely that any party will get the 80 seats needed for a majority in parliament. That makes some form of coalition inevitable, but forming a stable alliance looks tough.
Both Fianna Fail and Fine Gael said before the election that they would not go into a coalition with Sinn Fein because of its links to past violence. Varadkar said Fine Gael's stance was unchanged. But as the scale of Sinn Fein's surge became clear, Fianna Fail leader Micheal Martin said: "I'm a democrat."
"I listen to the people. I respect the decision of the people," he told Irish broadcaster RTE. The IRA was responsible for murders, bombings and other violence for decades during the "Troubles" in the UK region of Northern Ireland.
More than 3,500 people were killed during decades of conflict between forces that sought to reunify Northern Ireland with the Republic of Ireland and those who wanted Northern Ireland to remain part of the UK. Supporters of Sinn Fein point out that it has been more than 20 years since Northern Ireland's 1998 peace agreement and 15 years since the IRA announced the end of its violent campaign.
Sinn Fein already sits in government in Northern Ireland as part of a power-sharing arrangement created by the peace process. "This vote for Sinn Fein is for Sinn Fein to be in government, for Sinn Fein to make a difference, for Sinn Fein to be tested, for Sinn Fein to deliver," party leader Mary Lou McDonald said.