How you open your car door matters to cyclists 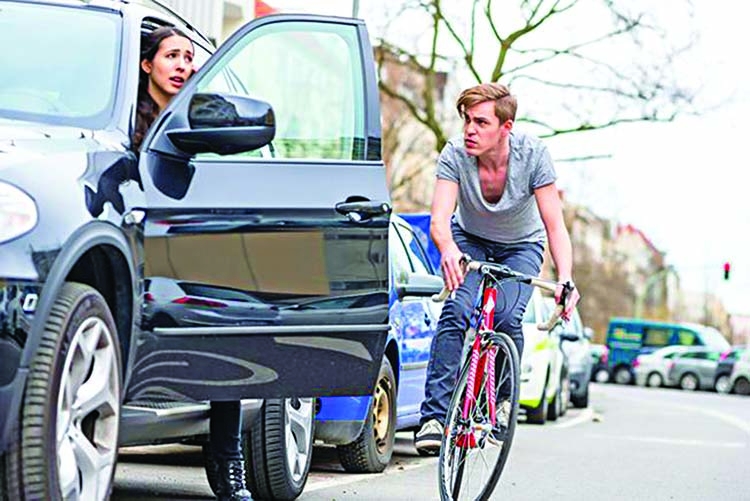 The "Dutch reach" isn't a new dance move or a random YouTube challenge. It's a simple move that can help prevent harm to cyclists, and you might just keep your car door safe in the process, too. All you have to do is change how you open your door.  Typically, a person sitting in the driver's seat of a car opens the door with the hand closest to it.
It makes sense since doors are designed to be opened that way. Pull the handle and presto, the door is open. But if you happen to do that at the wrong time, you may unwittingly create an obstacle for a passing cyclist. And that's the moment that makes you wince.
The cyclist will be sent tumbling off the bike, and the car door is likely to be damaged by the fast-moving bicycle. Obviously the solution is for the person exiting the vehicle to check for oncoming traffic, but car door design and long-time habits have made the process instinctual. Luckily, there's a simple way to solve the problem: Open your car door with your other hand, utilizing the Dutch reach, which you can see in the video below.
So instead of using your left hand, reach for the door latch with your right. This will force you to turn your body. At the very least, you'll look into your side view mirror to check for any traffic - of the two-wheeled or four-wheeled kind.Gaining popularityUnlike most Americans, the Dutch are used to opening their car doors this way.
"It's just what Dutch people do," Fred Wegman, professor emeritus of Traffic Safety at Delft University of Technology and the former managing director of SWOV, the National Institute for Road Safety Research, in the Netherlands, told The New York Times. "All Dutch are taught it. It's part of regular driver education."
The technique, which doesn't have a name in the Netherlands, dates back about 50 or 60 years, and it was very popular between the 1960s and '80s, when there was a large push to reduce traffic fatalities, particularly those involving children.
The technique didn't really become known as the Dutch reach until a retired American physician named Michael Charney started the Dutch Reach Project in 2016 in an effort to popularize the practice in the United States and beyond.
According to The Times, he was motivated by the death of a 27-year-old who rode into an open car door and died just five blocks from his home in Cambridge, Massachusetts.Charney's efforts may be paying off. Both Massachusetts and Illinois now include the Dutch reach in their drivers' manuals.
"I had a hard time retooling myself," Charney explained to the Times. "But it's a simple behavioral fix; if you do it, it works." To make it a habit, Charney recommends attaching a ribbon to the door handle as a visual reminder to use your other hand.