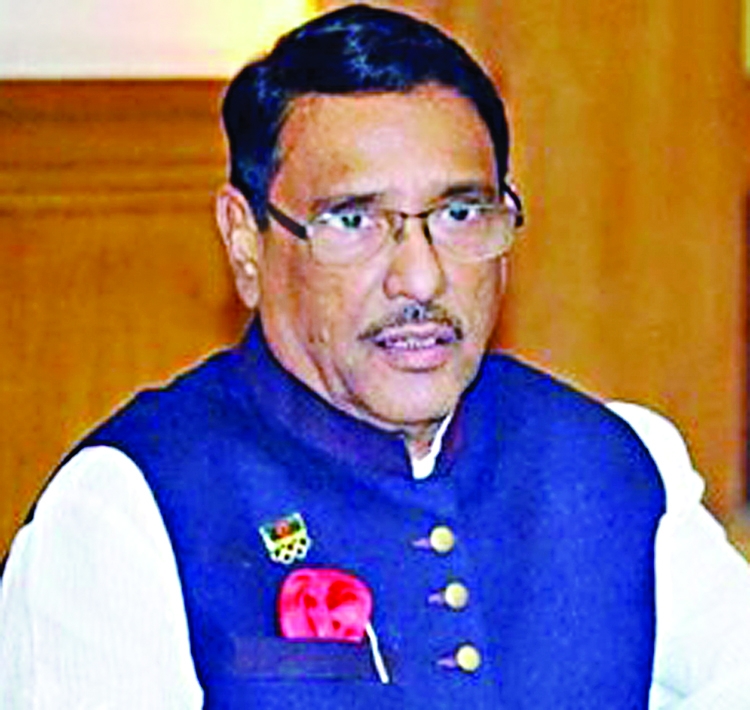 Awami League General Secretary and Road Transport and Bridges Minister Obaidul Quader on Monday said BNP has become dependent on foreigners as the party has no confidence in the people. "
BNP has become politically bankrupt. Making complaints is now their only asset. If they have any complaint, they should make it to the countrymen not to foreigners," he told a press conference on contemporary issues at Road Transport and Highways Division conference room at the secretariat.By lodging complaints to foreigners, BNP has proven that they have no confidence in the people and the voters, he said.
Quader said it is natural that there will be opponents in politics. "But we should refrain from uttering offensive and abusive language against political opponents. Making offensive language does not go with a learned person like Dr Kamal Hossain," he said.
The AL general secretary said politics has also a language but using indecent language cannot be accepted in politics."There could be difference of opinions in politics. Psychological conflict cannot be accepted. If psychological conflict can be avoided, it would expedite the qualitative change in politics," he said.
Asked whether all political parties will get invitation in the reception ceremony of Bangladesh U-19 Cricket Team,the minister said invitation was extended to all parties in the inaugural ceremony for the beginning of countdown for the birth centenary celebration of Father of the Nation Bangabandhu Sheikh Mujibur Rahman and responding to the invitation Gono Forum President Dr Kamal Hossain, Krishak Sramik Janata League President Bangabir Abdul Kader Siddique and AQM Badruddoza Chowdhury joined the function, but none from BNP joined.
The AL general secretary said when BNP Chairperson Begum Khaleda Zia's younger son Arafat Rahman Koko passed away, Prime Minister Sheikh Hasina went to BNP's Gulshan office to console the mother who lost her son but the door and gate were kept locked.
He underscored the need for breaking down the evil circle in politics as courtesy in politics is going to be lost.The culture of opposing everything for being an opponent party should be avoided for better future, he added.