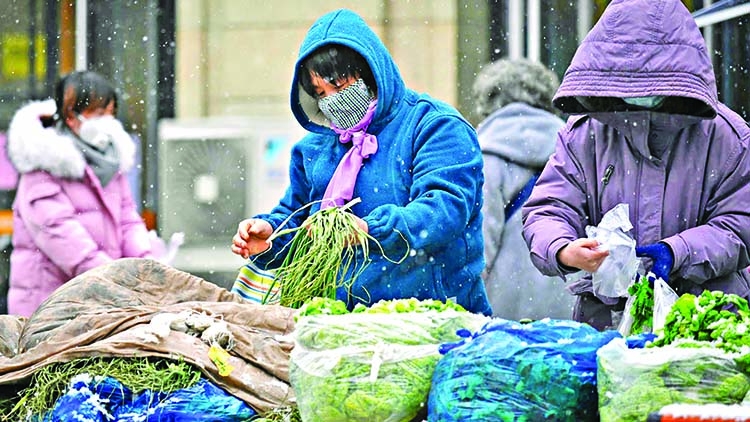 China`s major trading partners by country in exports and imports for 2018. -AFP
China consumer prices rose at their highest rate in more than eight years, official data showed Monday, with inflation more than expected on the back of Lunar New Year demand and a deadly virus outbreak.Beijing had already been battling a slowing domestic economy before the new coronavirus emerged, disrupting businesses, travel and supply chains.
The consumer price index (CPI), a key gauge of retail inflation, came in at 5.4 per cent last month on-year, up from 4.5 per cent in December -- with prices of pork and fresh vegetables pushing up costs. Food prices spiked 20.6 per cent. The overall monthly figure exceeded the 4.9 per cent forecast by analysts in a Bloomberg survey and is the highest since October 2011.
"The year-on-year increase has been affected not only by Spring Festival-related factors but... by the new coronavirus as well," said the National Bureau of Statistics on Monday.Analysts expect China's struggle to contain the spread of the virus over the Lunar New Year holiday, which started in late January, to keep prices higher than usual.
"Some food supplies may spoil before shipping to large cities due to the disruption of transportation and other lockdown measures, especially for fruits, vegetables and livestock," said Lu Ting of Nomura in a research note.
"People also tend to hoard food and other supplies in this kind of situation. The hoarding will most likely push up prices." The virus has so far claimed more than 900 lives in China.The rise in January was the highest since October 2011 when CPI inflation was 5.5 per cent, UOB's head of research Suan Teck Kin told AFP.
He added that while prices tend to fall after the Lunar New Year break, "this year, prices may continue to stay high" because of supply chain disruptions.Over the past year, a spike in pork prices due to African Swine Fever, which ravaged pig herds across the country, had also driven up CPI.
The rise slowed in December as officials released pork reserves to ease the strain on supplies ahead of the holidays, a peak period for consumption.Last month, pork prices rose 116 per cent from a year ago, up from the 97 per cent rise in December. The on-month rise for pork was 8.5 per cent.
The producer price index, an important barometer of the industrial sector that measures the cost of goods at the factory gate, rose 0.1 per cent in January. It had fallen 0.5 per cent in December.
--AFP