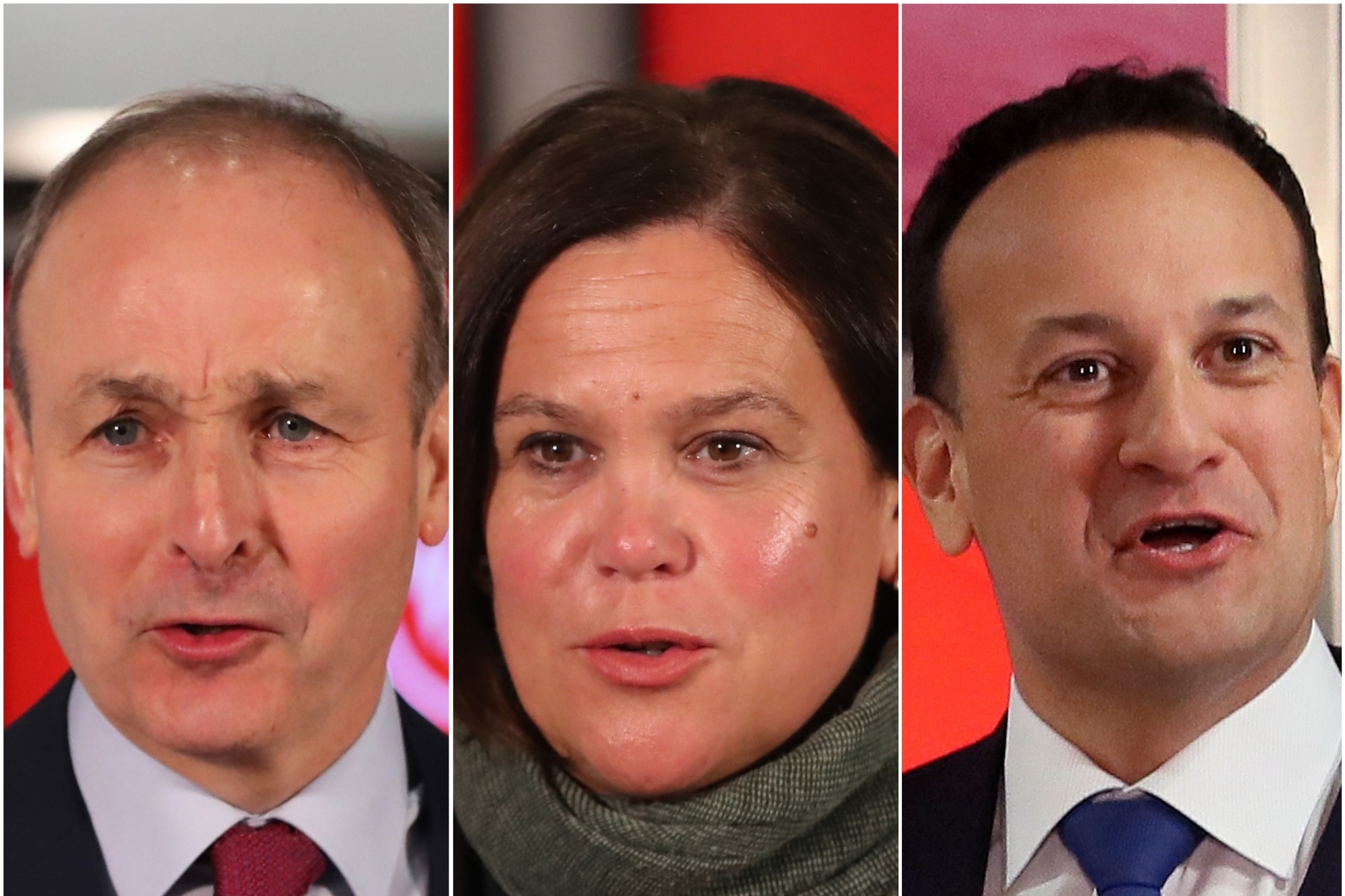 Micheál Martin (Fianna Fáil), Mary Lou McDonald (Sinn Féin) and Leo Varadkar (Fine Gael)
Fianna Fáil has won the most seats in the Irish general election just one ahead of Sinn Féin, who recorded a historic result.
Sinn Féin's haul of 37 seats is an increase of 14 on the 2016 election.
Fine Gael, whose party leader Leo Varadkar led the outgoing government as taoiseach (Irish prime minister), finished with 35 seats, down 15 from four years ago.
The tight numbers could lead to lengthy negotiations to form a government.
The election results were confirmed shortly after midnight when two Fianna Fáil candidates, Brendan Smith and Niamh Smyth, won the last two seats in Cavan-Monaghan.
The final results showed that:
The outcome was described as "something of a revolution in the ballot box" by Sinn Féin leader Mary Lou McDonald.
With all first preferences counted, the left-wing republican party has taken 24.5% of the vote, compared to 22% for Fianna Fáil and 21% for Fine Gael.
Before the election, both Fine Gael and Fianna Fáil had ruled out forging a coalition with left-wing republican party Sinn Féin, citing its tax policies and IRA past as deterrents.
On Sunday, taoiseach (Irish PM) and Fine Gael leader Leo Varadkar conceded it would be "challenging" to form a government.
Fianna Fáil leader Micheál Martin did not rule out working with Sinn Féin, but said "significant incompatibilities" still existed.
Sinn Féin President Mary Lou McDonald, who topped the poll in her four-seat Dublin Central constituency, said Sinn Féin wanted to be in government and was working to establish if the numbers were there to deliver it without Fianna Fáil or Fine Gael.
On Monday evening, she said she had not heard from the leaders of those two parties and has instead been speaking to Labour, the Green Party and other smaller parties that make up the Dáil (Irish parliament).
"People want different politics, new politics and better government - a new government - and I believe Sinn Féin will be the core of that," she told reporters in Dublin.
"I may well be the next taoiseach," she added.
Speaking to BBC Newsnight, Mrs McDonald also said she believed constitutional change was coming.
"The point has been conceded in the Good Friday agreement by the British state - the presence here is solely on the basis of consent," she said.
"That consent can only be tested in a unity referendum and we are going to have a unity referendum - and I want us to do it in an orderly, thoughtful democratic and absolutely peaceful manner."
Sinn Féin's vice-president, Michelle O'Neill, said the party would have "asks in terms of the republican project", in line with its repeated calls for the next government to prepare for Irish unity.
Why the Sinn Féin surge?
Left-leaning Sinn Féin managed to successfully tap into the public anger felt in the Republic of Ireland over issues that have dogged centre-right Fine Gael for a number of years - a shortage of housing, rocketing rents and homelessness, analysts suggest.
That is despite the fact the country is forecast to have one of the fastest growing economies in the EU in 2020.
They were dubbed "the problems of success" by former Finance Minister Michael Noonan as far back as 2015.
Brexit - a considerable focus of Leo Varadkar and his deputy Simon Coveney while in power - barely registered as an issue in the campaign.
Democratic Unionist Party (DUP) leader Arlene Foster, whose party is in a power-sharing government with Sinn Féin in Northern Ireland, said younger voters had backed Sinn Féin as a "protest vote".
"From a Northern Ireland perspective we will have to work with whoever the government is in the Republic of Ireland," Mrs Foster told BBC News NI.
She also said Sinn Féin may have their focus on Northern Ireland questioned, in the way there had been a "wailing and gnashing of teeth" over her party's confidence-and-supply agreement with the previous Conservative government in the UK.