Rains set to put out all NSW fires by week's end 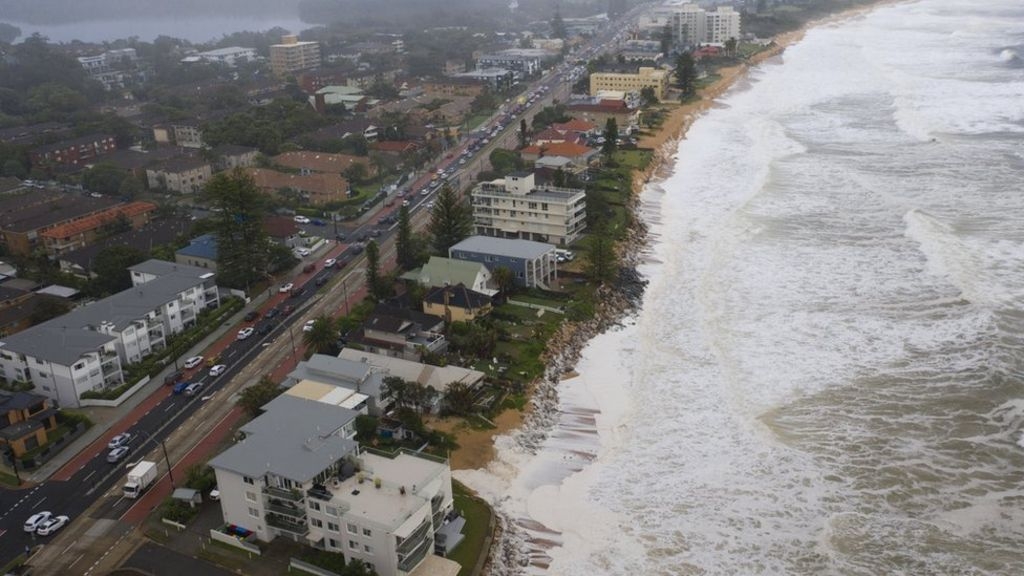 Heavy rains in New South Wales in recent days have led to hopes that all the bushfires in the Australian state could be out by the end of the week.
Since Friday, parts of the fire-ravaged Australian state have experienced their heaviest rainfall in years.
The rain caused widespread flooding - hundreds of people had to be rescued, including one man stranded in a tree.
The deluge has also extinguished 30 fires, leaving only four "uncontained", said the NSW Rural Fire Service (RFS).
In total, 24 fires remain burning across the state.
"Given the forecast, we should be able to get on top of those relatively quickly and set the fires down," RFS spokesman James Morris told the BBC.
"We are hoping by the end of the week we may be able to have zero uncontained fires across NSW," he said.
Officials have renewed wet weather warnings for parts of the coast and the neighbouring state of Queensland, but said the heaviest downpours had passed by Tuesday.
Since Friday, Australia's largest city, Sydney, has received 391.6mm of rain - the equivalent of a four month total, said the Bureau of Meteorology.
Emergency response services in NSW said they had received about 10,000 calls across the state on Monday as wild weather brought down trees, flooded homes and disrupted public transport.
Among the hundreds of rescues carried out, emergency workers saved one man from a flooded river in the state's north. He had been swept away and survived by clinging to a tree for 10 hours.
In another rescue north of Brisbane, a man and woman were saved after they were also spotted clinging to a tree. They had been swept away from their campsite on a blow-up mattress, authorities said.
As the rain eased overnight, crews began to clear up landslides across the coast and started restoring power to more than 100,000 homes.
Two "mega fires" north and south of Sydney were officially extinguished by the drenching, officials said. Both fires had been burning since November, and had scorched around 500,000 hectares each.
On Tuesday, NSW Rural Fire Services Commissioner Shane Fitzsimmon said 800 firefighters had been diverted to help with the storm clean-up effort, while only 100 firefighters remained at active fire grounds.
He said the blazes still burning were located further inland in Snowy Valley and Monaro regions, which had missed much of the coastal rains.
While the fire season was not over yet, he said the prolonged drenching had helped dampen the landscape.
"We can still expect the odd, hot, dry and windy day but it's going to be on top of a landscape that is considerably different than where we were only a matter of weeks ago," Mr Fitzsimmons told the Australian Broadcasting Corporation.
NSW has been the state most devastated in the bushfires crisis this year. The unprecedented scale and intensity of the blazes is a direct effect of climate change, scientists say, with rising temperatures leading to hotter, drier conditions across the country.
Nationally, blazes have killed at least 33 people and destroyed thousands of homes. More than 11 million hectares of land - an area comparable to the size of England - has been affected.