UN calls for donations to tackle desert locusts in Africa 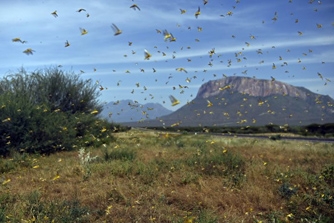 The UN undersecretary general for humanitarian affairs called on the international community Monday to help East African countries affected by locust swarms expressing his deep concern over the situation.
“There are 13 million people in the affected countries who are severely food insecure now,” said Mark Lowcock during a UN press conference. “Ten million of those people are in the places affected by locusts.”
Lowcock, who said he had recently released $10 million for the crisis, warned that “unless there was a rapid response, we are going to have a huge problem later in the year.”
The locusts have devastated food supplies in Kenya, Ethiopia and Somalia. They were reported in Uganda on Sunday.
According to Lowcock, the UN Food and Agriculture Organization (FAO) estimated at the end of January that a locust control plan would cost $76 million.
“What we have so far is just $20 million,” he said.
“Unless we get a grip of this in the next two or three or four weeks, we are worried we are going to have a really serious problem.”
Lowcock said the locust outbreak was “the worst for 70 years in Kenya, for 25 years in Ethiopia, Somalia,” and said one of the reasons behind the swarms was climate change.
Desert locusts — whose destructive infestations cause major crop damage — are a species of grasshopper that live largely solitary lives until a combination of conditions promote breeding and lead them to form massive swarms.
Swarms formed in eastern Ethiopia and northern Somalia have moved through the region.
The FAO says the current invasion is known as an “upsurge” — when an entire region is affected — however, if it gets worse and cannot be contained, over a year or more, it would become what is known as a “plague” of locusts.
There have been six major desert locust plagues in the 1900s, the last of which was in 1987-89. The last major upsurge was in 2003-05.