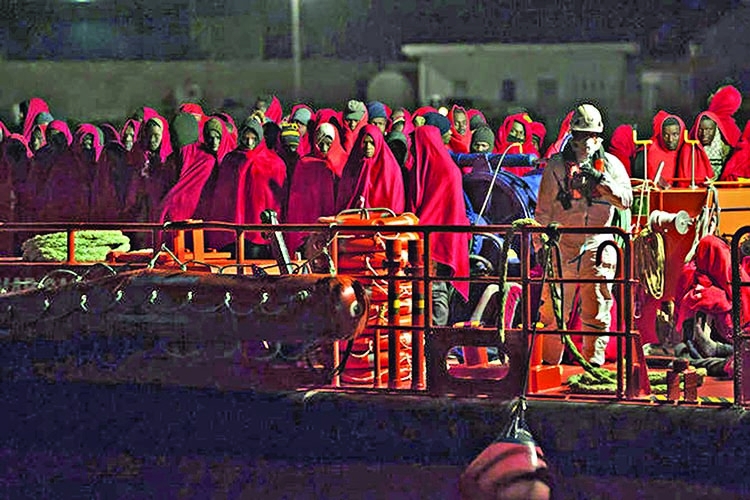 A group of migrants rescued by Spanish maritime authorities stand on a rescue vessel as they arrive at Malaga port, Spain, Tuesday. -AP
uAP, Madrid
Spain has rescued 119 migrants from the sea and was looking for 67 others still missing from a boat that was trying to reach European shores, maritime authorities said.A spokesman with Spain's Maritime Rescue agency said the search for the missing rubber boat in the stretch of Mediterranean Sea separating Spain from Morocco had been suspended for the night y and was to resume Tuesday.
The official, who was not authorized to be named in media reports, said the dinghy was believed to be in Morocco's rescue area.He said two other rubber boats had been found in the area known as the Alborán Sea with 60 and 59 migrants from Africa, and that all of them would be disembarked in Spain's southeastern city of Málaga.
The migrants, including 26 women and five children, were in good health, the spokesman said.Refugees fleeing violence and migrants fleeing poverty look for a new life in Europe by setting off on dangerous trips by sea from African coasts.
Spain became the main entry point into Europe for migrants in 2018 but saw the number of arrivals halved last year to 26,168. Recently it has seen an uptick in the number of boats heading to the Canary Islands, which lie in the Atlantic Ocean off Africa's northeastern coast.Morocco received 140 million euros ($155 million) in European Union funds in 2019 to crack down on illegal migrant crossings.