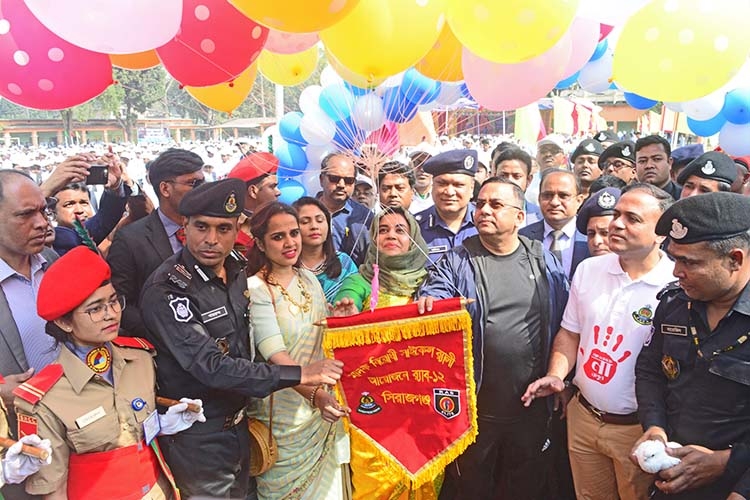 All classes of poeple should come forward to fight against militants, terrorism and narcotics and these socials problems must be uprooted fully and irrespective religion and class, all kinds of people come forward to demolish them from the society.
The diverted people should come to the main track of lives and the responsibilty of  the religious leaders and peachers so that the development of Bangladesh will be enhanced with the leadership of the daughter of Bangabandhu and Prime Minister of Bangladesh Sheikh Hasina.
Only then the country will be listed in the developed country and Bangladesh will be role model in the world, said DG, RAB, Dr. Benjir Ahmed, BPM (Bar), as the chief guest in the gathering of Religiuos and Preachers of Islam at Police Lines of Bogura on Tuesday afternoon.
Special guests were Additional DG (Operations) Colonel Tofael Mostafa Sarwar, DIG of Rajshahi Range Police Md. Hafiz Aktar, BPM (bar), Commanding Officer (CO) of RAB 12 Lieutenant Colonel Khairul Islam, President and Secretary of district unit Awami league Mojibur Rahman Mojnu and Ragebul Ahsan Ripu, Commander of district unit Muktijoddhaya Shangsad Ruhul Amin Bablu, Vice Principal of Jamil Madrasha Abdul Haque Hakkani, President of Press Club Mahamudul Alam Nayon and others. The gathering was presided over by the superintedent of police (SP) of Bogura Ali Asraf Bhuiyan BPM (Bar).
The speakers spoke before around 4 thousand religoius and islamic personalities were present in the gathering and urged to them to preach the right ways of islam to motivate the people of the country so that they can find the peace of Islam.
Earlier, a anti drug cycle rally among 1800 students of 19 schools of Bogura district took part in the rally from Govt. Azizul Haque College Old building to Central school of the town arranged RAB 12 Bogura in the morning of the same day.
---Mamun ur Rashid, Bogura