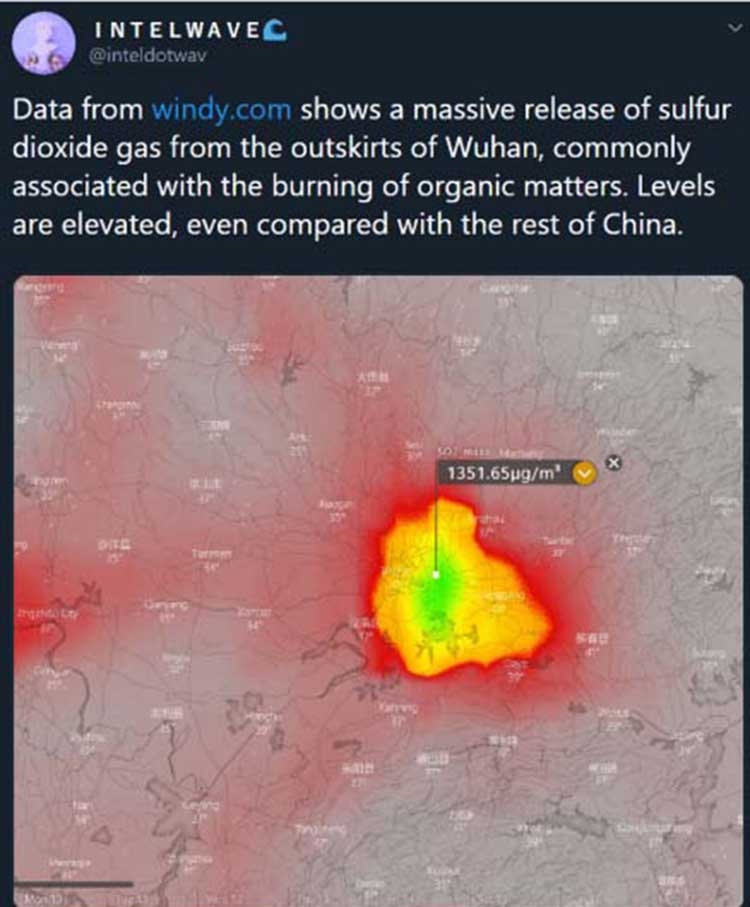 Massive amount of sulfur dioxide is being released in Wuhan. Source: Twitter
Rising sulfur dioxide levels in air around Wuhan suggests Chinese government could be burning thousands of bodies to contain coronavirus outbreak.
Evidence suggests that crematoriums are running 24×7 and burning thousands of infected dead bodies in a day. Data has suggested a massive amount of sulfur dioxide is being released into the air. Sulfur concentration is especially high around Wuhan and Chongquing, the cities most affected by the Wuhan coronavirus.
The massive release could be because of the crematoriums burning dead bodies en masse on the outskirts of the cities.
Evidence suggesting that the Chinese government is hiding the actual severity of the Wuhan coronavirus outbreak is piling up. Every estimate, whistleblower, and unconfirmed report suggest the actual number of coronavirus casualties is much higher than what the official data says. Just last week exiled Chinese billionaire Guo Wengui claimed that the total coronavirus casualties are well over 50,000.
This number was his estimation based on the number of bodies China's crematoriums are burning every day. Data has surfaced recently to suggest Wengui's estimate may be correct. A heatmap taken from Windy shows a tremendous amount of sulfur dioxide levels in air around mainland China.
Rising sulfur levels indicate a release of organic matter in the air, as a Twitter user pointed out.Ideally, there could be several reasons behind the sudden spike. Nuclear plants, garbage, and animal carcass burning or the industrial areas could all be responsible.
But, the elevated levels of almost 1400 ug/m^3 could point towards mass crematoriums running overtime in these areas. For context, 80 ug/m^3 level is usually considered dangerously high.
Next in line was Chongquing, a megacity in southwestern China, with 800 ug/m^3. Coincidentally, Chongquing has also been severely affected by the coronavirus outbreak. Chongqing has also witnessed a significant rise in sulfur dioxide levels.
The Chinese government has shut down many major factories, coal-fuelled power plants, and manufacturing to curb the coronavirus outbreak. So there is little chance that they could be responsible for the rising levels.And if you compare the levels to other parts of the world, where these plants are operational, the stark contrast is apparent. China is glittering with spots of massive sulfur dioxide release.
Due to the massive rise in sulfur levels, thick smog has blanketed the city of Wuhan. Reports suggest that this smog is coming from the crematoriums on the outskirts of the city. After finding out about the rising sulfur levels, users of the controversial website 4chan did some digging. They pointed out that a single human corpse, when set alight, releases 113 g of sulfur dioxide.
So to account for the rise in sulfur dioxide levels around Wuhan, one would have to burn 13,968 bodies.Statement of crematorium workers roughly back up the findings of 4chan users. The workers say that they have been working day and night to take care of the ever-increasing inflow of coronavirus casualties.
A worker at the Wuhan crematorium confirmed they were receiving over 100 corpses a day. The evidence against the Chinese government keeps piling up. Is it a coincidence every estimate, every model, every whistleblower says the actual number is much higher than what the government is reporting? It doesn't seem so.


The writer is a trader and financial blogger. The article first appeared on ccn.com