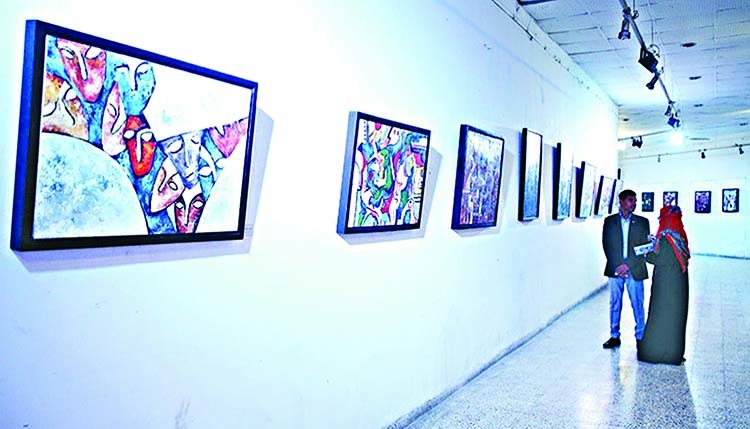 Artist Abu Saleh Titu has portrayed the frayed city that is Dhaka and the lived experience of its inhabitants in his solo painting exhibition that is under way at the lobby of the main auditorium of Bangladesh National Museum. 'I want to portray the sorrows and sufferings of mass people living in the capital through my paintings.
People are enjoying the colors of the city. My paintings will give the visitors a glimpse into the relationship between the city and its people as well as my observations and feelings about the city,' Abu Saleh Titu said. 'I also want to portray the sufferings of women living in the city.
The artworks depict deconstructions that go on in the name of massive urbanization, besides the changes that occur through population influx, pollution etc,' added Titu.The 10-day exhibition titled 'Rusty Allure' features 43 paintings created using mediums like acrylic and oil.
The works explore subject matters including urban women, mechanical love, relationship between concrete physical reality and the residents, disconnect involving urban people, frayed roads and others.Ekushey Padak-winning artist Monsur Ul Karim inaugurated the exhibition as chief guest on February 7.
To mention a few works, an acrylic painting titled 'Sorrow of Concrete' shows a wall comprising different geometrical shapes with shattered forms. The wall is burning with fire portraying the sufferings of people.
An acrylic painting titled 'Rhythm of City 4' shows congested buildings peopled with human forms while another acrylic titled 'Yellow Love 3' shows a man lying on bed and a woman disrobing. It depicts pragmatic relationship between man and woman in urban life set against background covered with various colors including white, black and yellow.
An acrylic painting titled 'Blue Women' shows three female figures clad in saris while their skin colour takes the color blue to articulate the sorrows and sufferings of urban women.
An oil painting titled 'Rusty Allure' shows a view of a city road while in the middle of the painting a rickshaw remains parked where a number of human figures are seen jostling on the road. The two sides of the painting show grey colors buildings.
Abu Saleh Titu was born in Chuadanga in 1969. He completed his masters from Bangla department at Dhaka University. The exhibition will remain open till February 16.