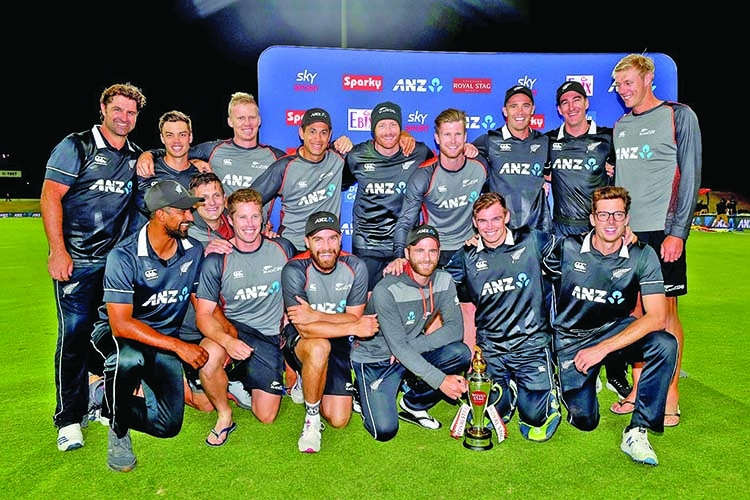 New Zealand cricket team pose for a photo session with the trophy after beating touring India by 5 wickets in the third and final ODI at Mount Maunganui on Tuesday. Hosts clinched the ODI series 3-0. -Getty
India suffered a rare series whitewash as New Zealand posted a five-wicket win in the third and final one-day international at Mount Maunganui on Tuesday.
A KL Rahul century was not enough to save the tourists, who scored a respectable 296 for seven after losing the toss and being asked to bat. But the Black Caps, stung by a 5-0 whitewash in the recent Twenty20 series, were determined not to let the chance of a retaliatory clean sweep in the ODIs slip away.
Openers Henry Nicholls and Martin Guptill gave the Black Caps a flying start with 80 and 66 respectively before Colin de Grandhomme saw them home when he bludgeoned 58 off 28 balls. The hosts finished on 300 for five, reaching India's target with 17 balls to spare, despite a mid-innings wobble.
It is the first time India have been whitewashed in a bilateral ODI series of three or more matches since 1989 and the only time it has ever happened against New Zealand. Leg-spinner Yuzvendra Chahals was the pick of India's bowlers, taking three for 47.
Earlier, Rahul boosted India's hopes with his fourth ODI century, bringing up the landmark off 104 balls, before departing on 112. He was supported by a gritty 62 from Shreyas Iyer but most of India's batters failed to live up to captain Virat Kohli's pre-match exhortation to play positively and post a big total.

Prithvi Shaw and Manish Pandey both reached the 40s but no other batters made double figures, with Kohli out for nine. Still, Rahul looked set to steer India to a huge total before Black Caps paceman Hamish Bennett slowed the scoring with a late flurry of wickets.
Rahul had a life on 64 when Mitchell Santner's throw at the stumps went wide and the batsman made the most of it to score his fourth ODI century, bringing up the landmark off 104 balls, including nine fours and one six. Bennett dismissed Rahul for 112 and then snared Manish Pandey for 42 off his next ball.
His fourth wicket came when Shardul Thakur sent a full toss straight to de Grandhomme, and the bowler was unlucky not to get another when Navdeep Saini almost edged the next delivery onto his stumps.
The focus now turns to Test cricket, with the first of two five-day matches scheduled to begin in Wellington on February 21.The results of both matches will count toward the inaugural ICC World Test Championship, in which India are runaway leaders at the top of the ladder.
---AFP, Mount Maunganui