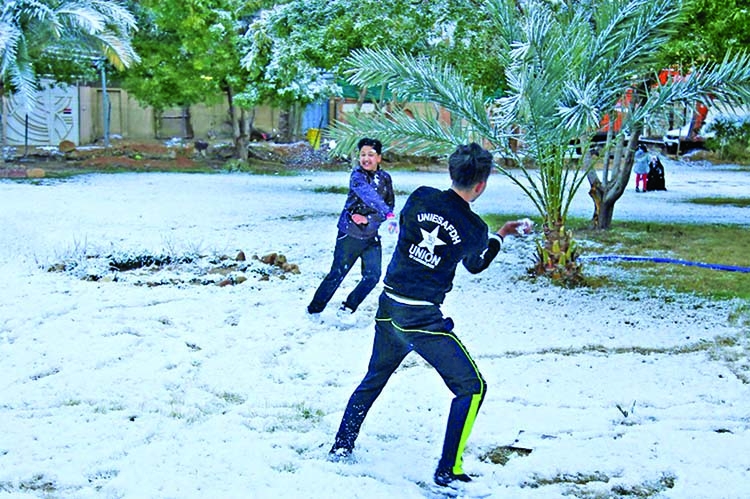 A snowball fight amid the palm trees young boys enjoy only the second snowfall in a century to carpet Baghdad and central Iraq. -AFP
Residents of Baghdad rushed to have snowball fights or take photographs Tuesday as the Iraqi capital woke carpeted in white by only its second snowfall in a century.
The last recorded snowfall in the city was in 2008, but it was a quick and mostly slushy affair -- and prior to that, it had been a century since Baghdad saw any flakes.Iraqis young and old said it was the first time they had ever seen snow falling in Baghdad.
The city's iconic palm trees were daintily outlined in white, and the tarpaulins of the long-running anti-government protest camp in Tahrir Square in the city centre were sprinkled with snow.People on their way to work stopped their cars to snap pictures or break out into impromptu snowball fights.
"Snowfall may continue until Wednesday given the very cold weather," said Amer al-Jaberi, media head of the Iraqi Meteorological Centre. "This cold wave came from Europe," he told AFP.
The people of Baghdad are more used to heat than cold.The highest temperature recorded in the capital was a searing 51 degrees Celsius (124 degrees Fahrenheit), a record it has neared several times in recent years.
South of the capital, snow also carpeted the Shiite holy city of Karbala, which draws pilgrims from round the world to its famed shrines, the golden-domed mausoleums of Abbas and Imam Hussein.
Snowfall is more common in northern Iraq, where snow covered the war-battered city of Mosul, but in the centre and south there is rarely enough precipitation. Iraq has been hit by a succession of extreme weather events in recent years.
In 2018, chronic water shortages sparked a health crisis in the centre and south but the following year, heavy rains caused deadly flooding and heavy damage to homes and crops.
Blistering temperatures then hit the north triggering wild fires and scorching crops.Experts say Iraq lacks the funding or infrastructure to cope with climate change and the desertification of once productive land.
---AFP, Baghdad