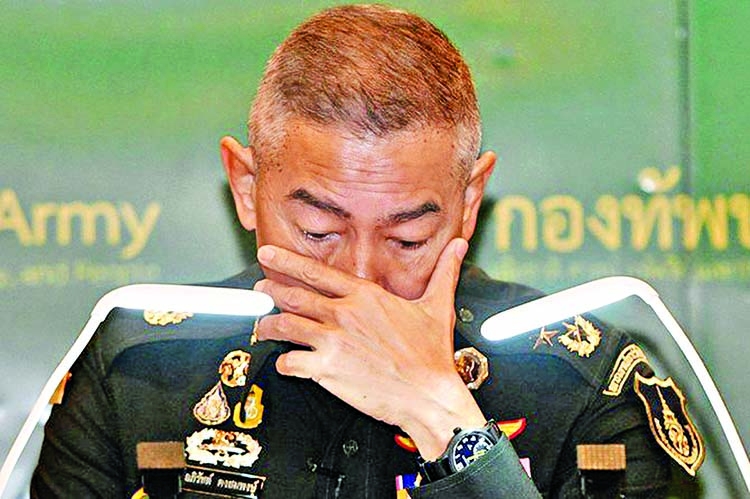 Thai army chief Apirat Kongsompong reacts during a news conference in Bangkok, Thailand, following last weekend's shooting rampage by a soldier at a mall in the city of Nakhon Ratchasima on Tuesday. -Reuters
Thailand's army chief apologized on Tuesday for a rogue soldier, whose 19-hour shooting rampage killed 29 people and wounded 57 over the weekend, stunning the country.
At times wiping away tears, Thai Army Chief General Apirat Kongsompong said during a 90-minute press conference that the army will help compensate all the victims and their families."I, as army chief, would like to apologize and say how sorry I am for this incident which was caused by a staff of the army," Apirat said.
"In the minute, the second that the perpetrator pulled the trigger and killed, in that minute he is a criminal and no longer a soldier," he said.
The soldier, Sergeant Major Jakrapanth Thomma, was shot dead by security forces on Sunday after he had stormed the Terminal 21 shopping center in the northeastern city of Nakhon Ratchasima the day before. The 32-year-old had started the killing early on Saturday, shooting his commanding officer and the commander's mother-in-law over a business dispute.
He then drove to his army base, stole more assault weapons and ammunition and shot his way through a Buddhist temple before going to the Terminal 21 shopping center, where he randomly fired at shoppers and held off police for more than 12 hours.
Apirat said the military would investigate the commanding officer who was killed, Col. Anantharot Krasae, 48, and the housing deal apparently brokered by Anantharot's mother-in-law Anong Mitchan, 63.Apirat said the commanding officer took advantage of the shooter in a land deal where a "promise was broken" over money matters.
He said authorities will find out who else was involved in the scheme and he promised a new line of communication so that army personnel could complain directly to the army chief.

"The army and I have already instructed this," he said, adding his mission before retirement in October was to make things fairer for army staff."I don't think any Thai people would like this incident to happen again, so please don't blame the army or berate soldiers," Apirat said.
"If you want to blame someone, you blame General Apirat Kongsompong. I accept all criticisms and opinions. You can blame me because I am the army chief," he said.
---Reutes, Bangkok